This short tutorial will guide you through assembling and soldering Micro Dot pHAT, our (up to) 6x5x7 pixel display board designed specifically for the Raspberry Pi Zero. Micro Dot pHAT uses the Lite-On LTP-305 displays and the IS31FL3730 driver chips to drive them.

Assembling Micro Dot pHAT is a little trickier than assembling our other pHATs, that just need their female header soldered, but we'll get you up and running faster than you can say Lite-On LTP-305 LED matrix.

If you're unsure about soldering, we'd recommend checking out our guide to soldering Pi Zero pHATs, which has some general tips on how to solder properly.

Depending on what you purchased, you'll have up to six of the LTP-305 matrices. Here, we'll show you how to solder all six, but if you have fewer than six, then obviously solder them in whichever positions you want on the board. If you're using just two, then we'd suggest using positions 3 and 4, and if you're using four then we'd suggest that you use positions 2, 3, 4 and 5, because symmetry.

We'll solder one display at a time, as the board is quite crowded, and you'll find that you have more space in which to work if you solder one at a time. 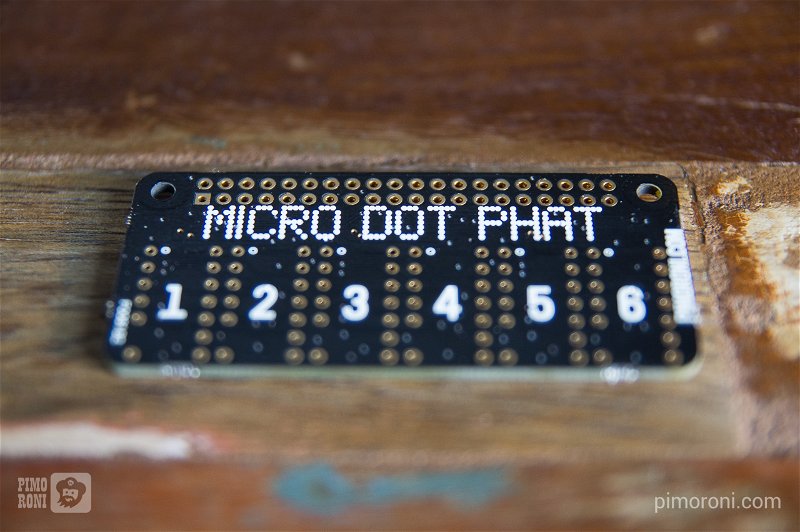 Making sure that you have the board with the large dot matrix Micro Dot pHAT logo and the numbered positions facing up the way, take one of the displays and gently push the pins on the underside of the display through the two sets of holes on either side of the number 1. 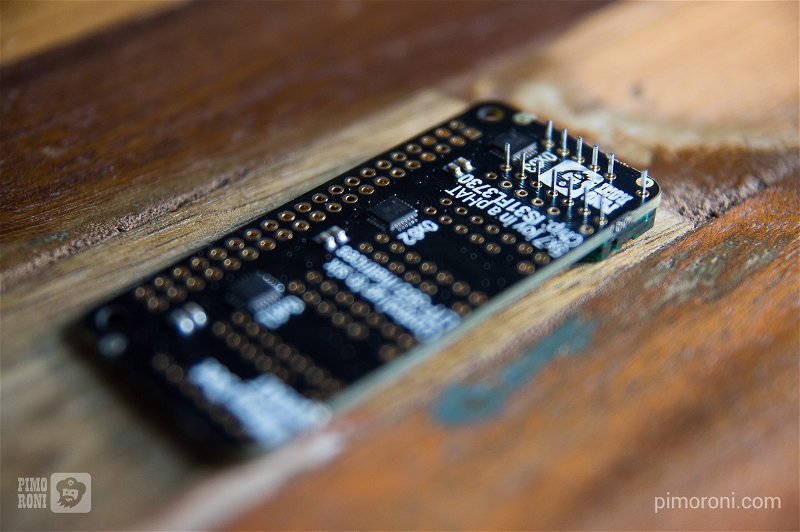 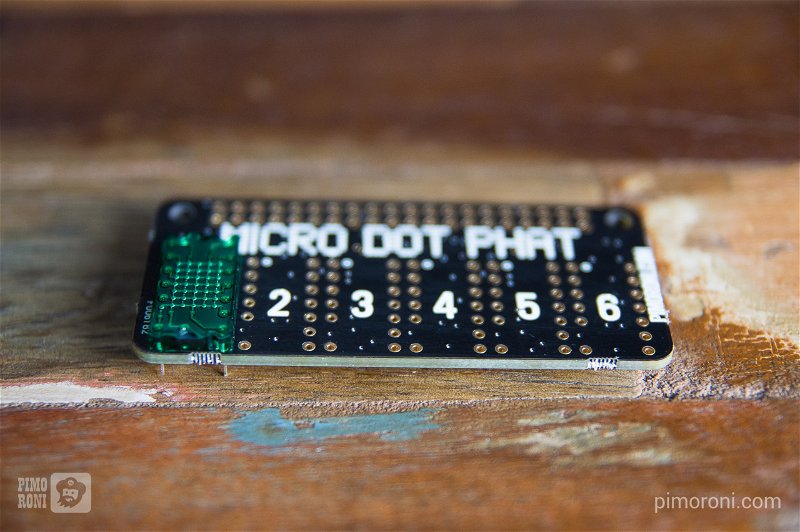 Flip the board over, and solder all 13 pins, making sure that the display is pushed down as close as possible to the top of the PCB. We trimmed the excess pin with a pair of flush cutters and then re-melted the solder to get a neater finish. 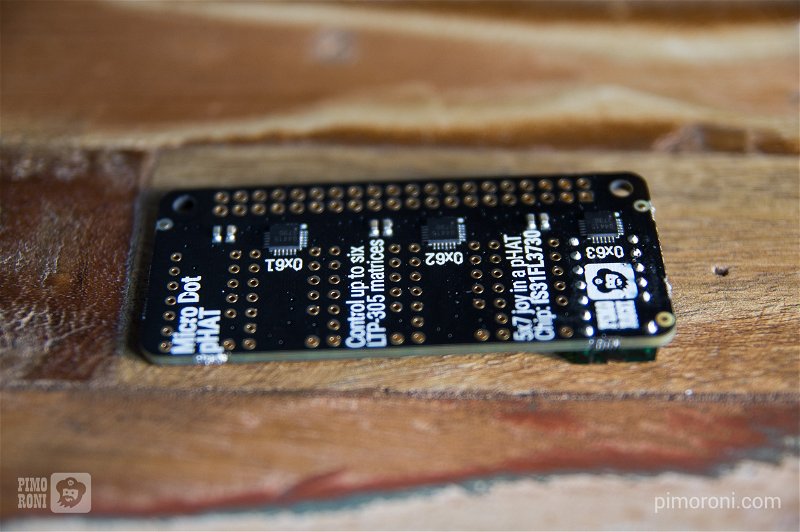 Do the same for the remaining displays, one at a time, soldering each set of pins and trimming the excess. 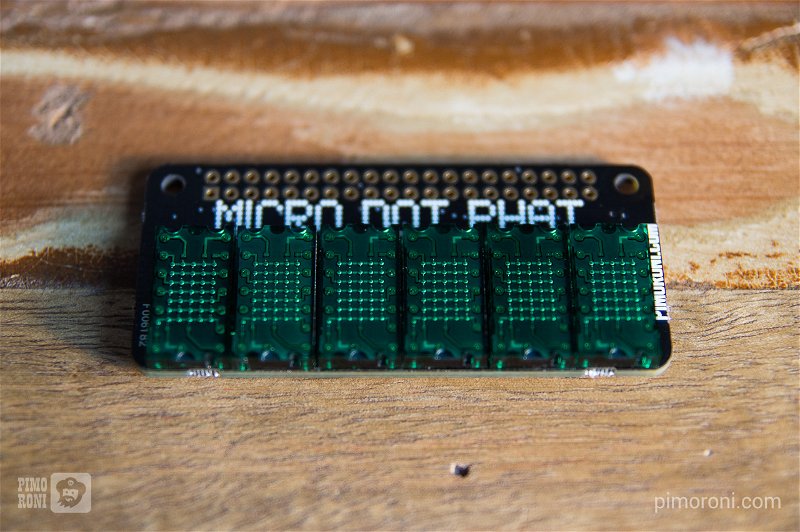 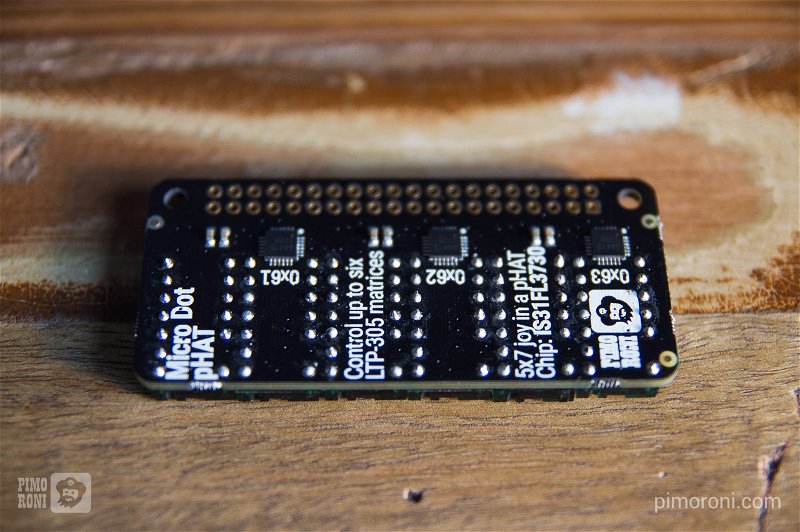 Assuming that you're going to be using Micro Dot pHAT in the usual way, with a female 40 pin header, rather than soldered direct to your Pi Zero, the final step is to solder the female header.

Push the pins of the female header through the holes on the Micro Dot pHAT PCB, from below, so that they protrude through the top of the board, as in the image below. 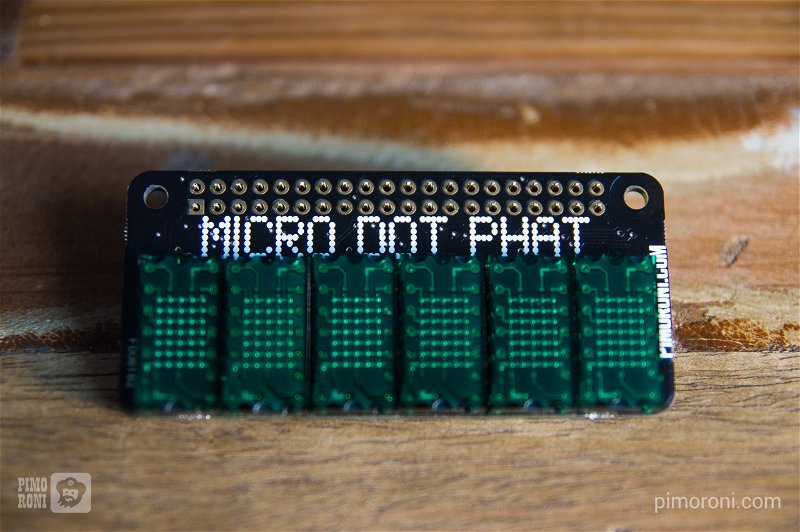 You can read about soldering headers to pHATs in more detail in our guide to soldering Pi Zero pHATs, but if you've got this far then we'll assume that you already know how to solder!

We mention in our soldering guide that it can sometimes help to use some masking tape (it's important not to use Sellotape or electrical tape as they can melt) to hold the header in place while you anchor a couple of the end pins.

Solder all 40 pins, making sure that you use a decent amount of solder, so that it forms a nice dome around the pin and covers all of the copper surrounding the hole, but making sure not to short any two pins together.

Once it's all soldered, it should look something like the image below. 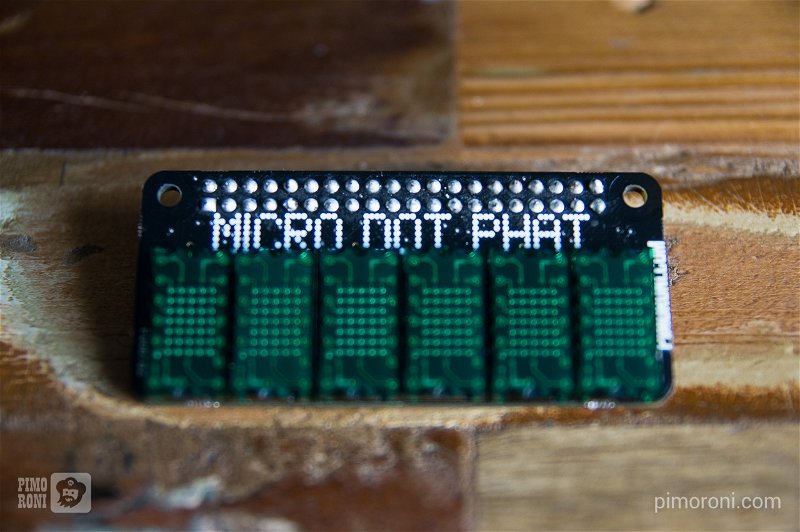 The last thing we'll do is a quick test to make sure that everything is working properly. We'd recommend using our nifty one-line installer to get everything set up properly and to download the examples.

Open a terminal window, and type the following to install the Micro Dot pHAT Python library:

You may have to press y or n a few times when prompted. Make sure that you choose to download the examples, which will be stored in /home/pi/Pimoroni/microdotphat/examples.

We'll run the flash.py example to make sure that all of the displays are working as expected and that the Python library has installed correctly. Type the following in the terminal to run the example:

You should see all of the pixels on all of the displays flash on and off continuously. If all, or some, of the pixels don't light, or if the script throws an error, then try running the one-line installer again and double check your soldering, re-soldering any pins that look suspicious.

Congratulations! You now have a fully functional Micro Dot pHAT.

How to assemble and solder Micro Dot pHAT