Picade Console will take around an hour to build. A large table with a soft covering is an ideal build space. All you’ll need is a Phillips screwdriver and a pair of hands.

1. Beginning to build the casing

Note that you’ll always be attaching the plastic brackets to the sides of the panels with the markings and text on.

Lay panel A with the text upwards, and the square-ish cutout on the left hand side. Attach three plastic brackets at the top corners and top edge, using three metal M3 bolts and nuts, with the nuts on the inside of the panel (the side with text on). The bolts go through the centre hole of the three on the brackets. 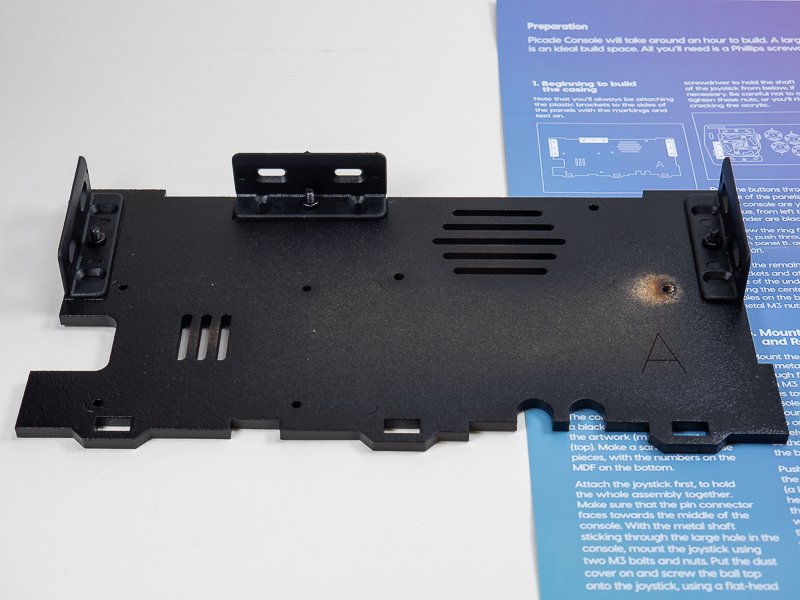 Take panel B and attach it to the bracket on the right hand side of panel A, using two more metal M3 nuts and bolts. 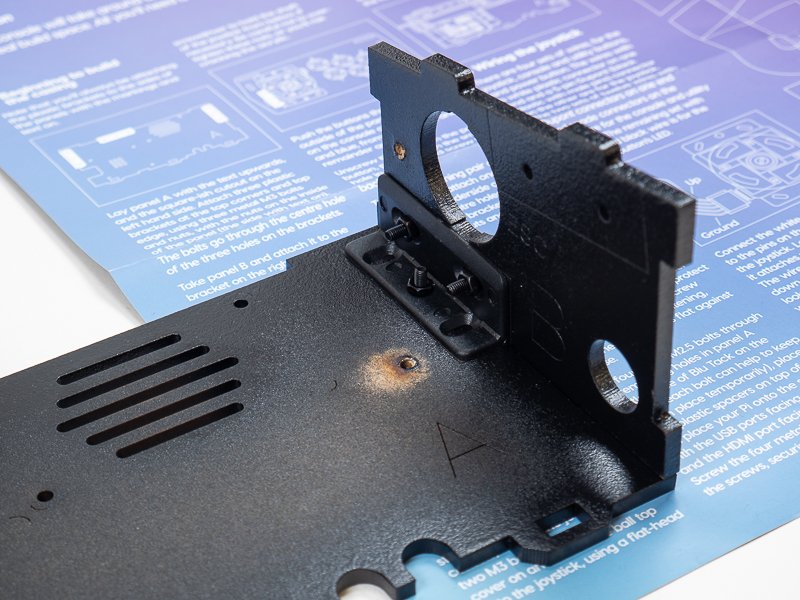 Attach panel C to the bracket on the left hand side of panel A, again using two metal M3 nuts and bolts. 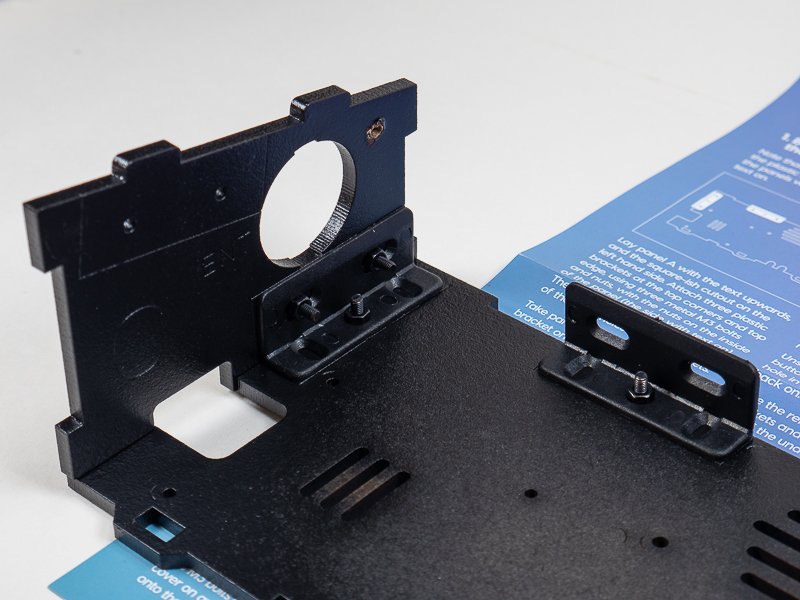 Attach the front, panel D, to the bracket at the front of panel A, using another two metal M3 nuts and bolts. 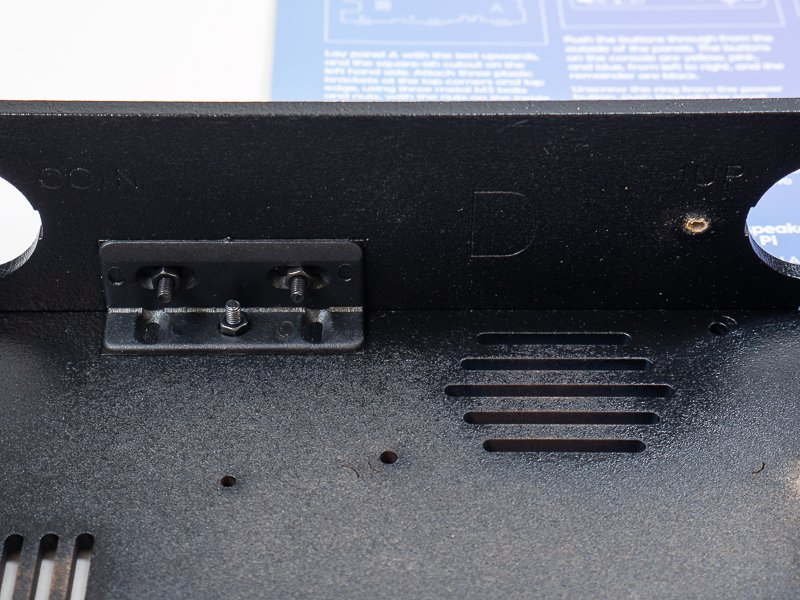 The console has three pieces: a black MDF piece (bottom), the artwork (middle), and acrylic (top). Make a sandwich of these pieces, with the numbers on the MDF on the bottom. 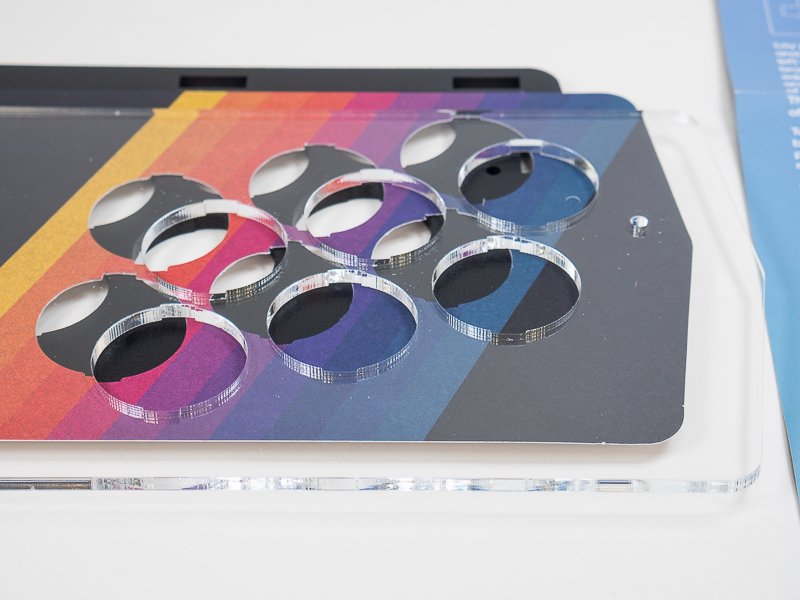 Attach the joystick first, to hold the whole assembly together. Make sure that the pin connector faces towards the middle of the console. With the metal shaft sticking through the large hole in the console, mount the joystick using two M3 bolts and nuts. Put the dust cover on and screw the ball top onto the joystick, using a flat-head screwdriver to hold the shaft of the joystick from below, if necessary. Be careful not to over-tighten these nuts, or you’ll risk cracking the acrylic. 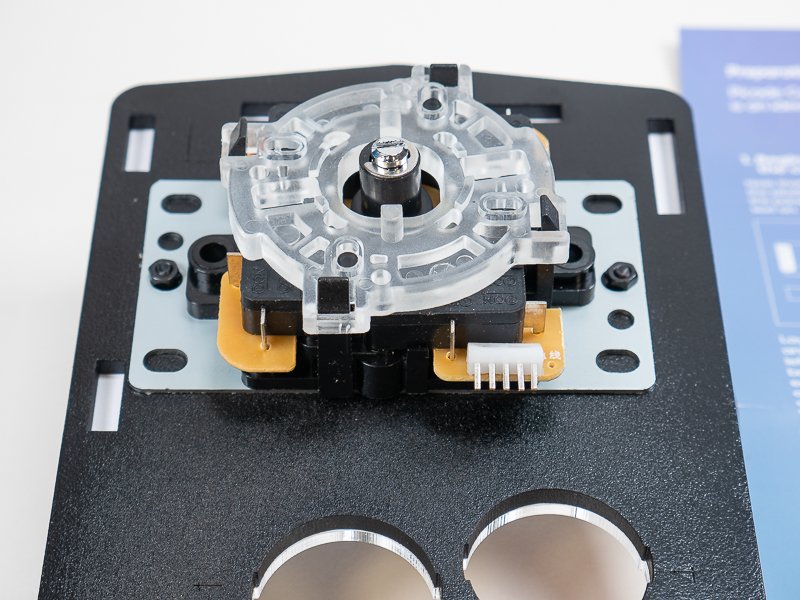 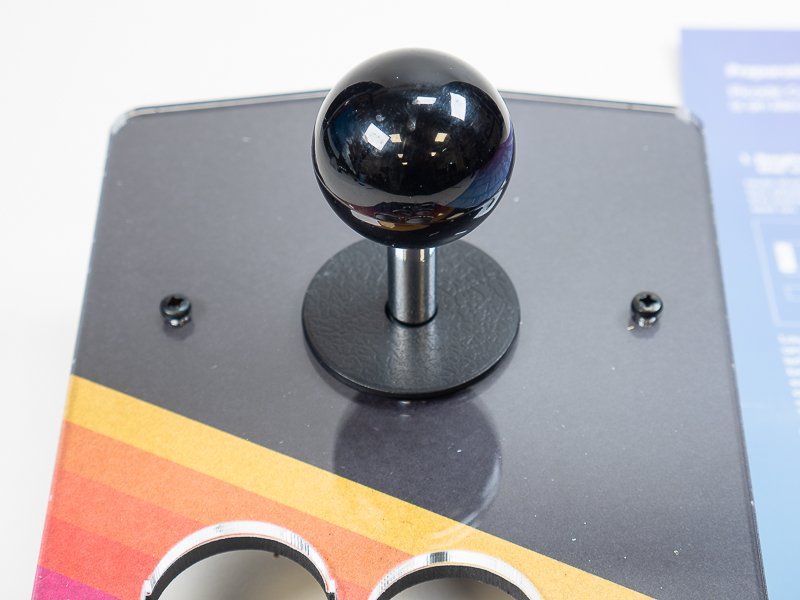 Push the buttons through from the outside of the panels. The buttons on the console are yellow, pink, and blue, from left to right, and the remainder are black. 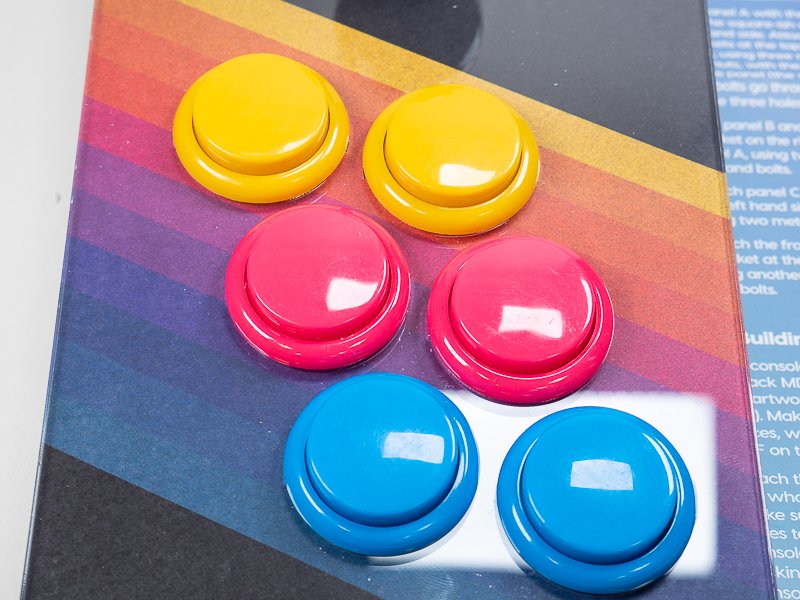 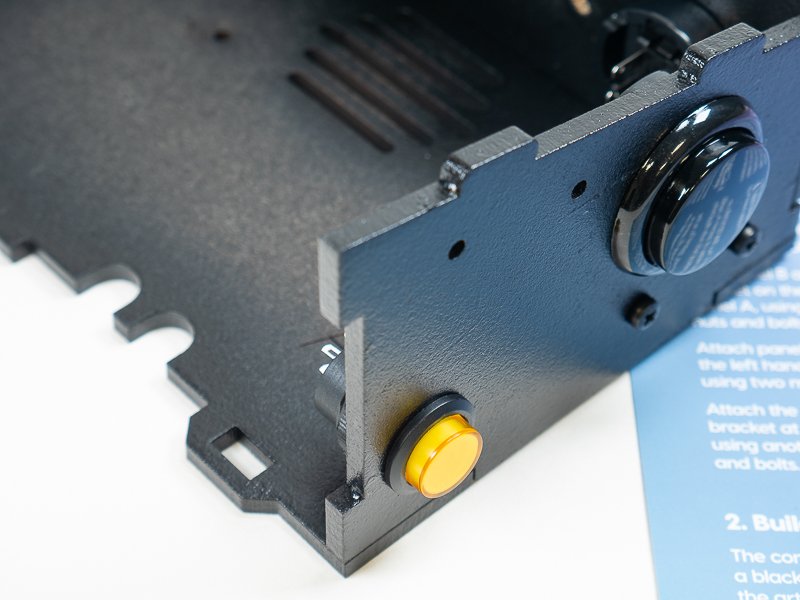 Take the remaining pair of plastic brackets and attach one to each side of the underside of the console, using the centre holes of the three on the brackets, with two metal M3 nuts and bolts. 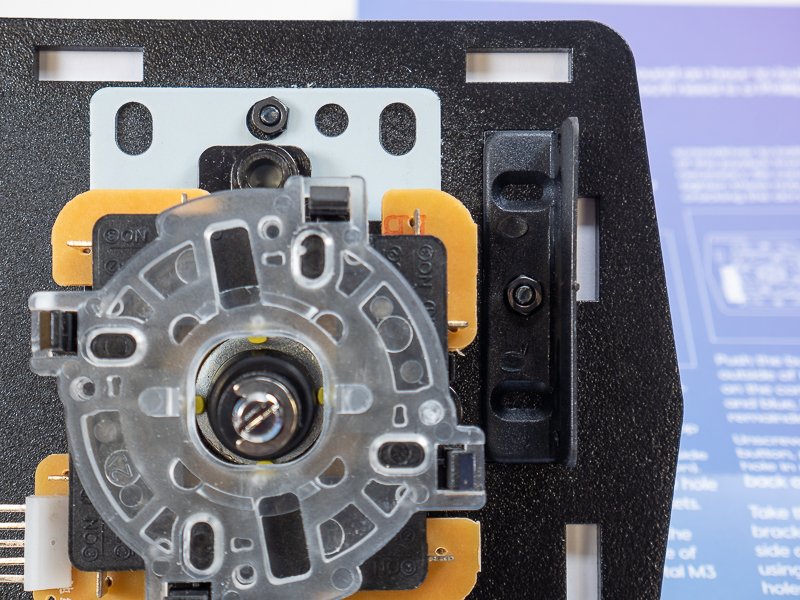 3. Mounting the speaker and Raspberry Pi

Mount the speaker in panel A with two metal M3 screws, pushed through from below, and secure with M3 nuts. It’s best to have the wires towards the centre of the console. The speaker has a rubber surround around the cone to protect it, so only tighten up each screw loosely before finally tightening, so that the speaker lies flat against the base. 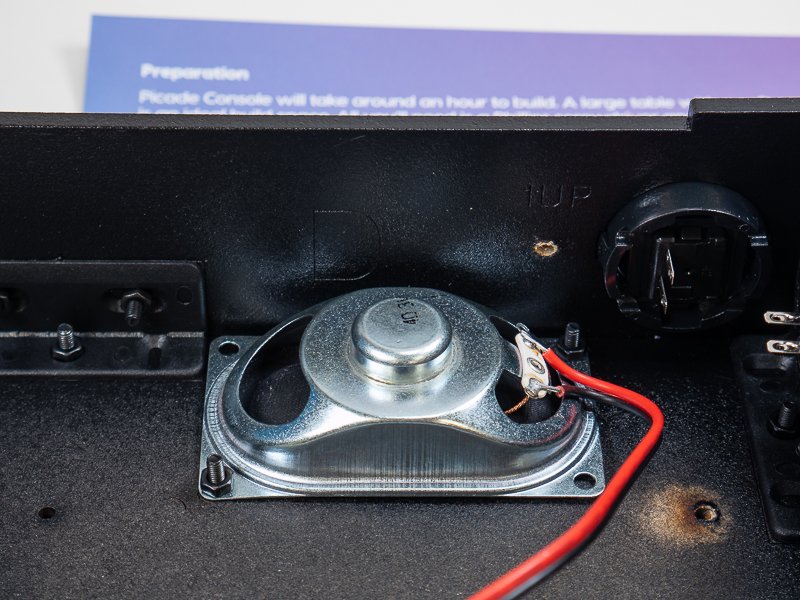 Push four nylon M2.5 bolts through the remaining holes in panel A (a little piece of Blu Tack on the head of each bolt can help to keep them in place temporarily), place white plastic spacers on top of each, then place your Pi onto the screws, with the USB ports facing panel B and the HDMI port facing the back. Screw the four metal standoffs onto the screws, securing your Pi. 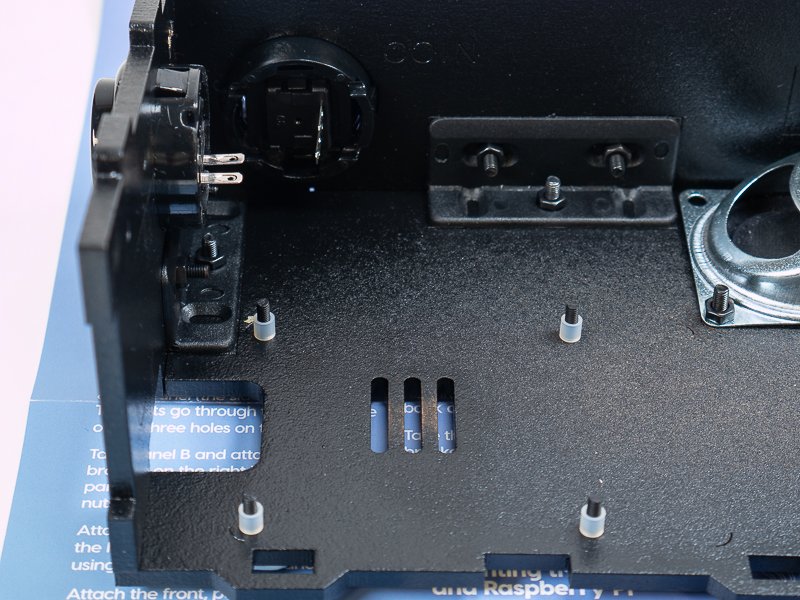 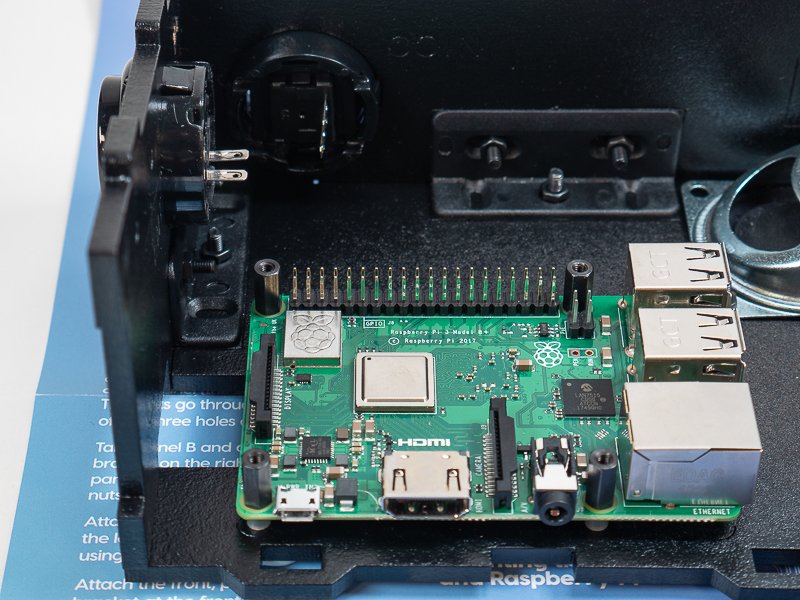 Fit the Picade X HAT, pushing it onto the GPIO pins on the Pi. Use four short metal M2.5 screws to secure the HAT to the standoffs. 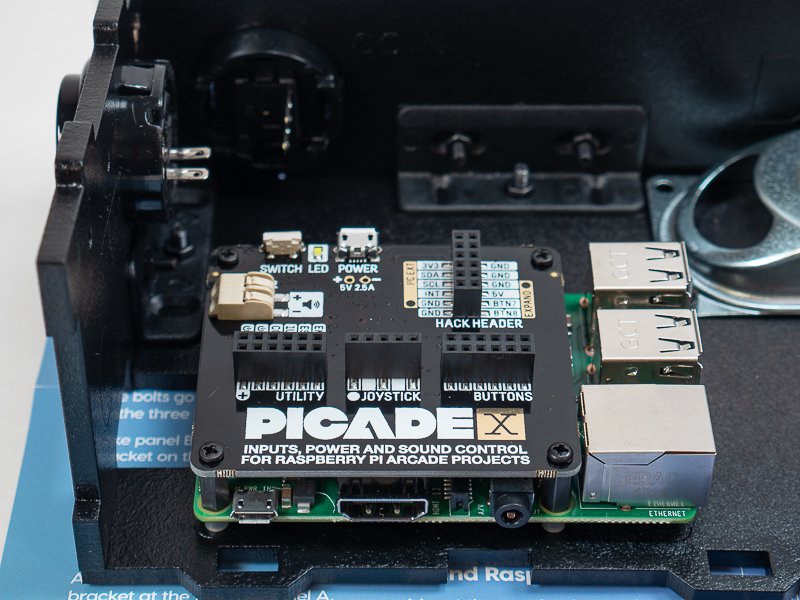 There are four sets of wires, for the joystick, console and utility buttons, and power button. The wires with a white plastic connector on one end and a 5-pin Dupont (black plastic with male pins) connector on the other are for the joystick. The two sets of twelve wires with Dupont connectors on one end and spade connectors on the other are for the console and utility buttons. The remaining set with a red and black wire is for the power button’s LED.

Connect the white plastic connector to the pins on the underside of the joystick. Looking from below, it attaches with the clip on top. The wires from left to right are up, down, right, left, ground, as you’re looking at the connector from below with the wires facing downwards. Take the other end, with the pins on, and plug it into the JOYSTICK header on the HAT. 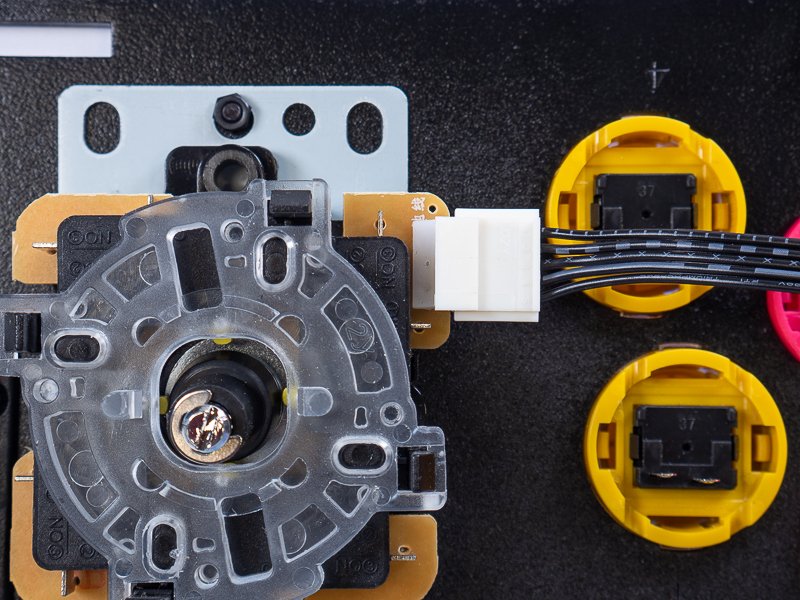 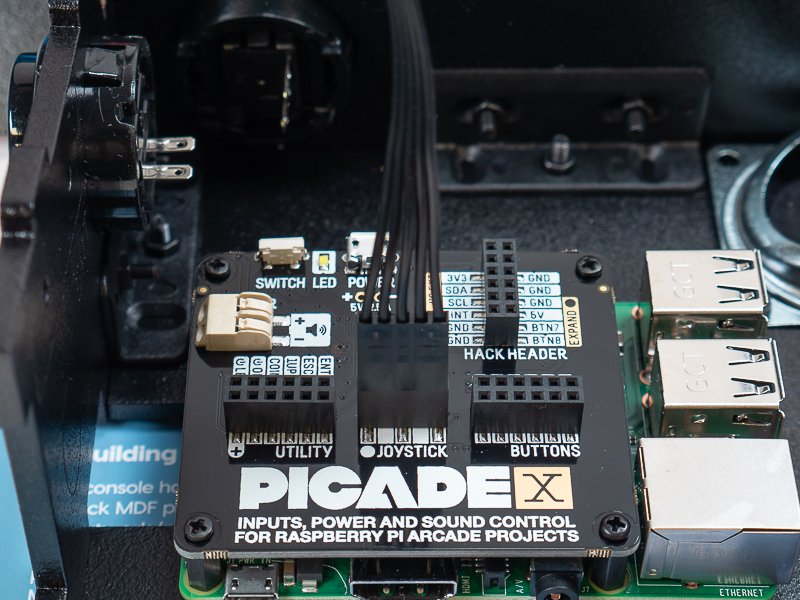 Next, take one of the sets of twelve wires, and separate the strands a little into six pairs at the end with the spades. Working from one side of the cable, connect each pair of spades to buttons 1 to 6 (marked on the underside of the console). Take the six pairs of pins at the other end, and connect them to the terminals marked BUTTONS, from 1 to 6 (orientation doesn’t matter). 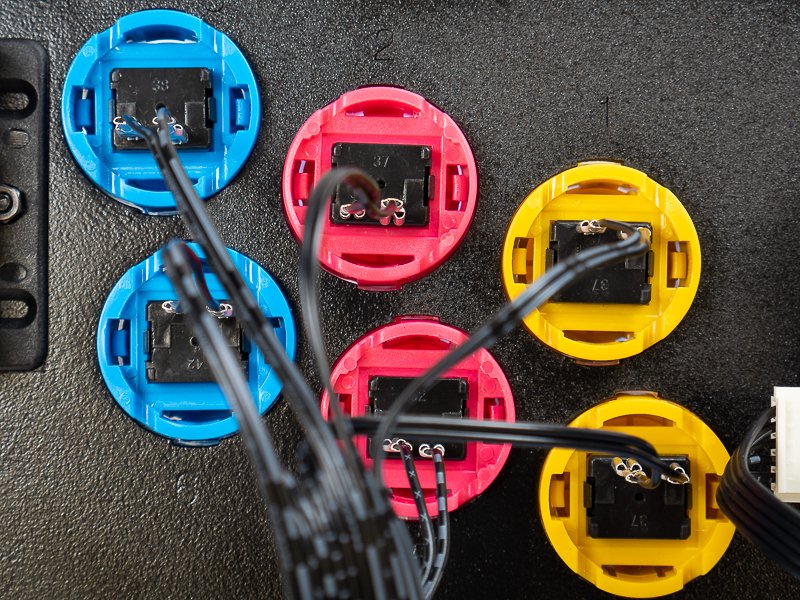 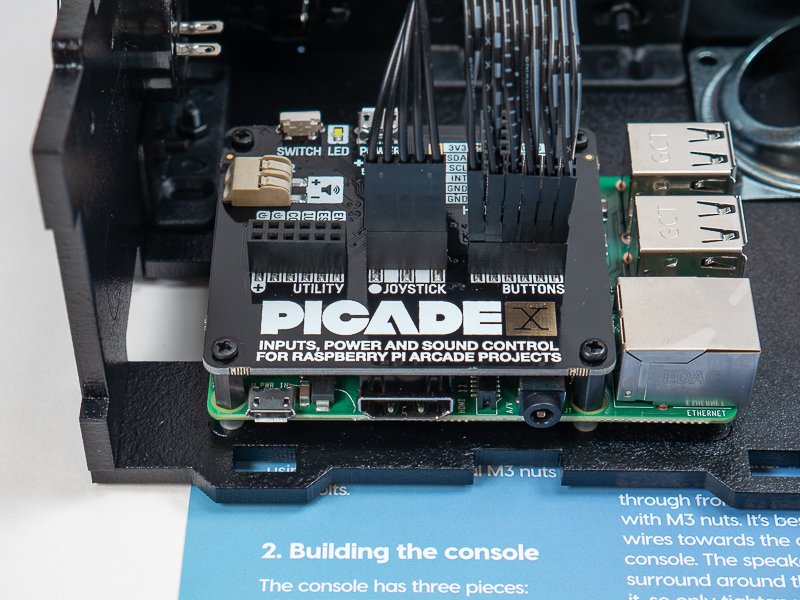 Take the other set of twelve wires, and strip off one pair of wires (you’ll only need five pairs). Again, separate the strands a little into pairs at the end with the spades. Taking each pair in turn, connect them to the ENT, ESC, 1UP, COIN, and power button respectively. On the power button, connect the spade connectors to the pair of spades closest to the edge of the button. Take the pins at the other end and connect them to the terminals marked ENT, ESC, 1UP, COIN, and ON respectively.

6. Wiring the power button and speaker

The remaining pair of wires, the red and black ones, are for the power button LED. Connect the red wire to the spade on the button marked + and the black to -. Connect the pins at the other end to the terminals marked LED, with the red one at the side marked +. 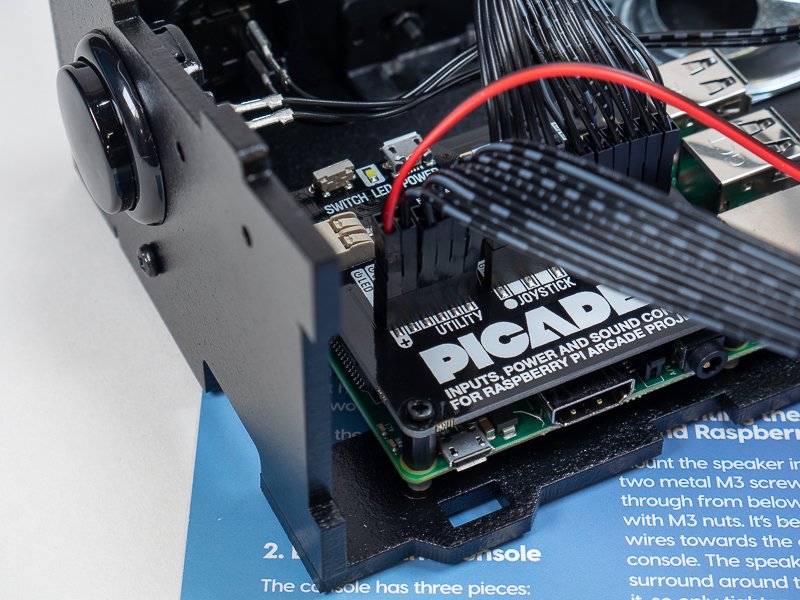 The speaker wires push into the terminals marked SPKR + (red) and - (black). Use a pen or pencil tip to gently press the clips on the speaker terminals as you push the wires firmly in. 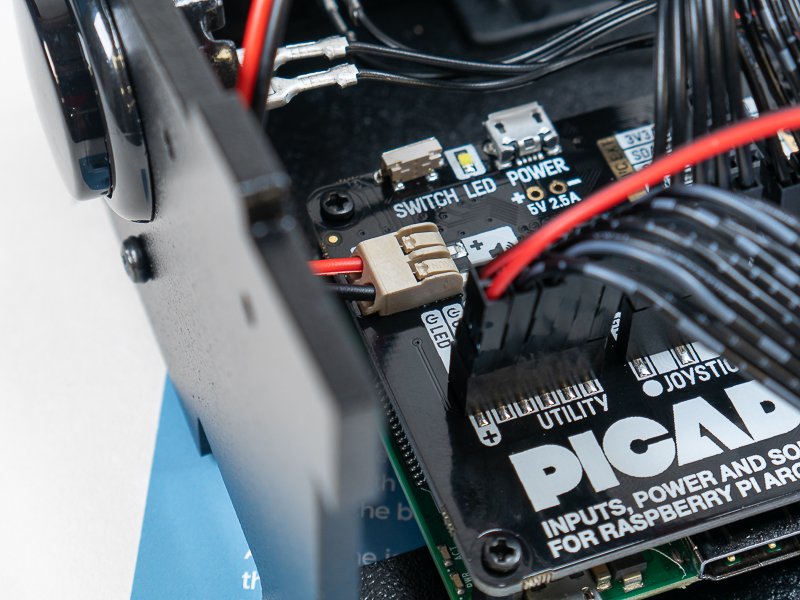 Before attaching the console, plug the male end of the panel mount micro-USB socket into the connector on the Picade X HAT. It’s important that you plug it into the HAT and not into the Pi itself, as the HAT handles power management. 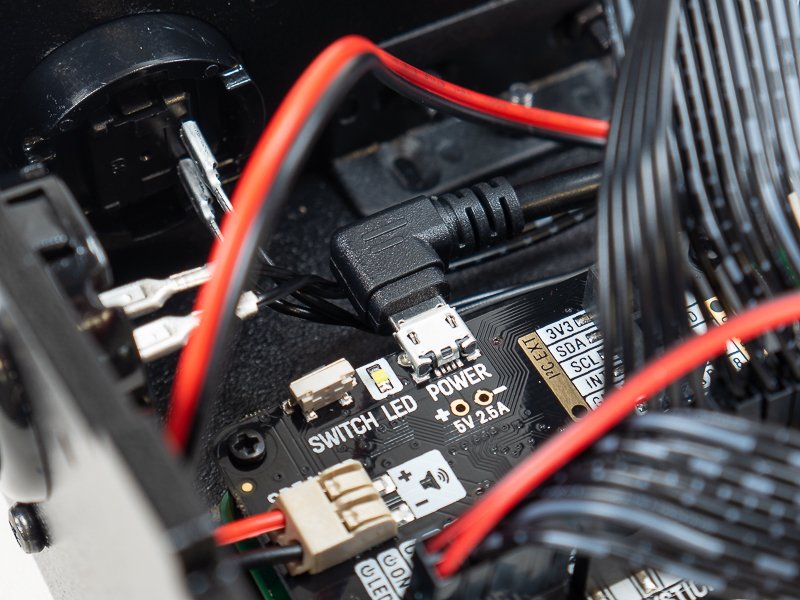 Slot the console into the casing, with the joystick closest to the side of the casing with the power button in, and attach with a pair of M3 bolts and nuts. Reach in from the rear of the cabinet to hold the nuts in place while you tighten the bolts.

Peel the backing off the rubber feet and stick them on the underside, in the four corners. 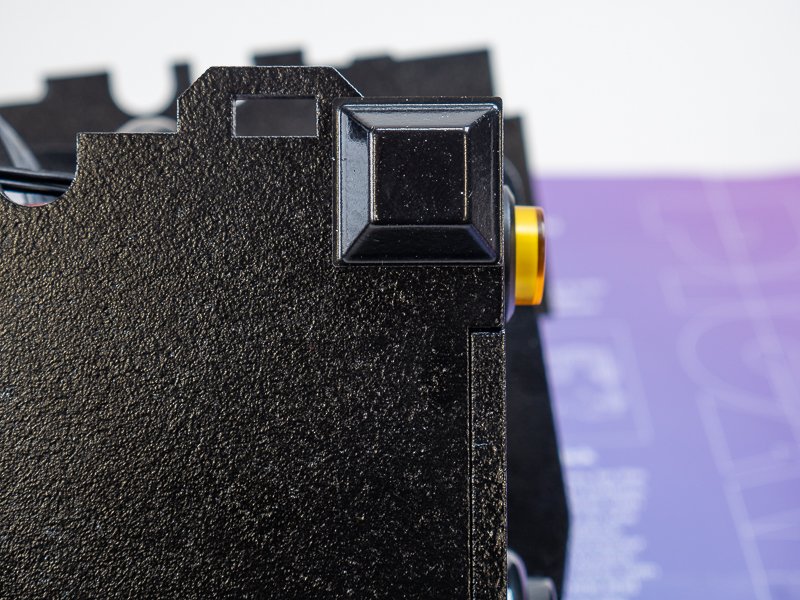 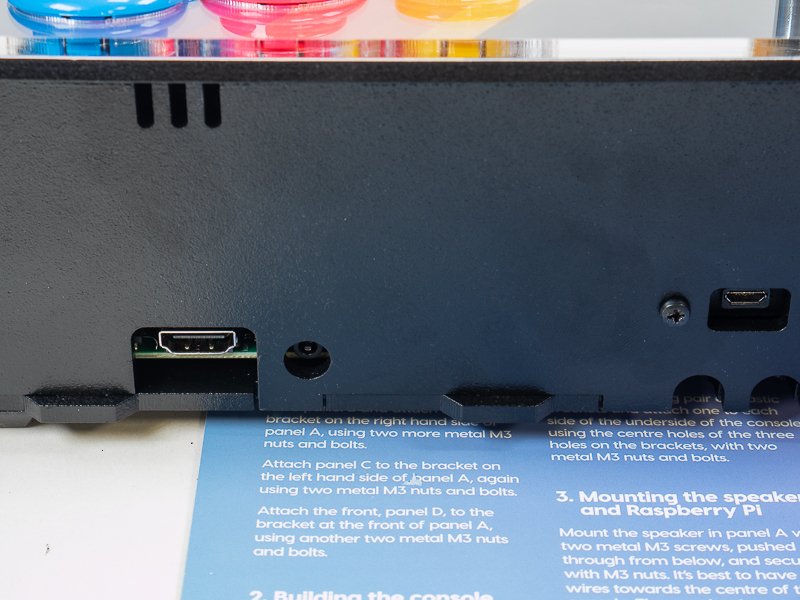 9. Getting up and running

Connect an HDMI cable from the back of your Picade Console to your TV or monitor, and plug a micro-USB power supply into the panel mount socket.

We recommend the RetroPie operating system. Download it from https://retropie.org.uk/download/, and burn it to a micro-SD card.

Plug a USB keyboard into your Picade.

Connect to Wi-Fi. It’s in the Retropie menu under "CONFIGURE WIFI".

To run the Picade HAT installer, which will set up the joystick and buttons, the audio, and the power button, exit the Retropie GUI by pressing F4 on your keyboard, and type the following: “curl https://get.pimoroni.com/picadehat | bash”, press “Enter”, then follow the instructions on screen.

PEW! PEW! PEW! Your Picade Console is now set up and ready to go!

Learn how to assemble and set up your Picade Console!