This intermediate tutorial will show you how to use Explorer HAT Pro to control 8 LEDs (or even more...) from just 3 output pins. Because Explorer HAT Pro has just 4 output pins, normally, you would be able to control only 4 LEDs, but the 8-bit shift register is a cunning little bit of kit. The wiring here is a bit of a logistical nightmare, but hopefully with the wiring diagram you'll manage.

In very simple terms, the 8-bit shift register has a series of 8 on/off switches that can hold the values 0 (off) or 1 (on). These 8 bits make 1 byte and can encode integer values up to 255 in binary. Each of these 8 bits are filled up one-by-one and shifted along each time a new one is filled, hence the name shift register. There are two latch pins that lock in these bits, the shift register clock (SRCLK) and the storage register clock (RCLK), as well as a serial (SER) pin that sets each bit on or off.

Each of the 8 bits controls one output pin, and we'll use these 8 output pins to control our 8 LEDs. This method of controlling multiple output pins with only a few input pins is known as serial-in-parallel-out (SIPO) as the information is passed in serially (the 8 bits) and then sent out in parallel (the states of the 8 output pins are updated at the same time).

Setting the hardware up

We need quite a few things to set this all up:

Note that you can get all of this, with the exception of the Raspberry Pi, Explorer HAT and mini breadboard, in the Explorer HAT Pro parts kit. 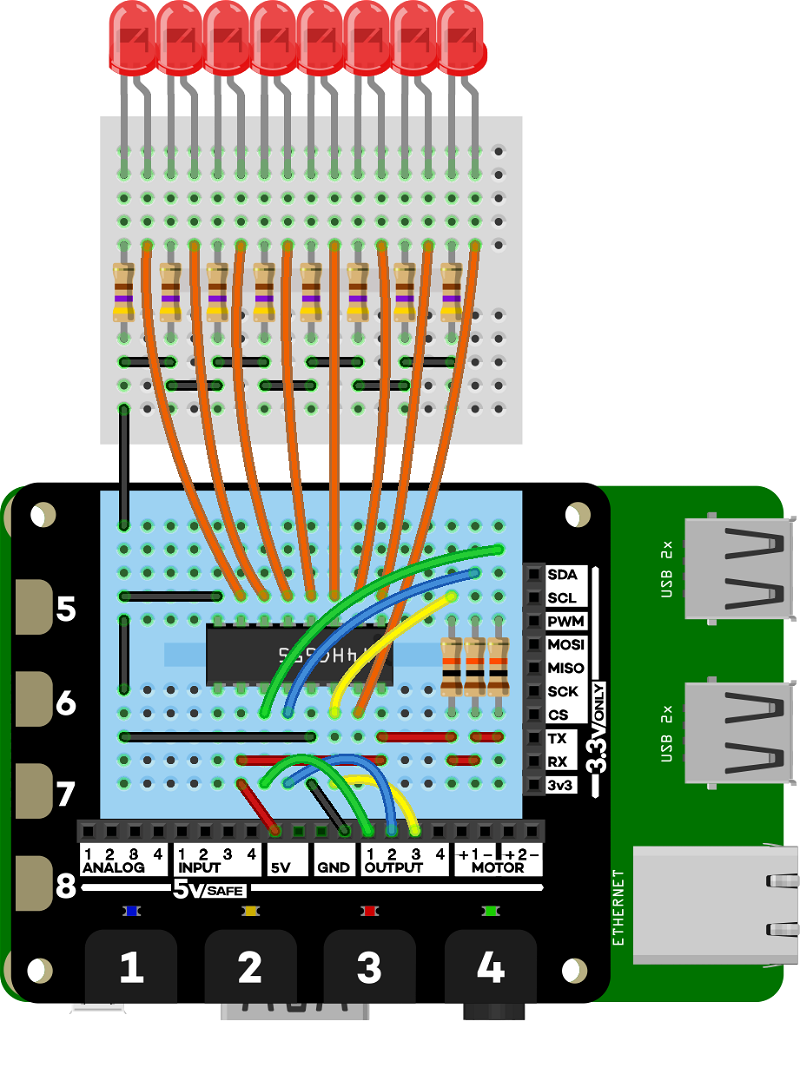 Setting the software up

I've created a new plugins module, in my fork of the Explorer HAT Python library, that contains a ShiftRegister class with methods for toggling the pins on or off and a few different patterns to use with LEDs.

Here's how to clone and install my fork:

I'll explain below how to use the ShiftRegister class and how it works, but if you're impatient, or just want to make sure that you've connected it all up correctly, then you can start an interactive Python prompt by typing python and pressing return. Type the following to run a demo of the ShiftRegister class:

How it works and how to use the ShiftRegister class

Here's the basic function from the ShiftRegister class that toggles a pin on or off:

So, if you want to toggle on LED 1 (remember that indices begin from 0 in Python, so pin 1 is actually pin 0) you would simply use toggle_pin(0, 1). Note that the state variable uses 0 for off and 1 for on in this function.

We'll break down how the function works.

Outside our function, we import the explorerhat library and define our srclk, rclk and ser pins.

The toggle_pin function takes two variables - pin and state - that define the pin we want to toggle and whether to toggle it off or on (0 or 1 respectively).

Remember that the pull-up resistors reverse what is happening with the output pins, so when it says on in the function, that's actually off and vice versa.

We toggle the storage register clock pin, rclk, off to begin with rclk.on().

Then for each output pin, for p in range(8):, we first toggle the shift register clock, srclk, off with srclk.on().

We toggle the shift register clock, srclk, on.

Finally, we toggle the storage register clock pin, rclk, on, to shift out all of the bits we stored.

So, that's how the basic function to toggle a single output pin on or off works. Obviously, if we wanted to toggle several pins simultaneously, this function wouldn't do, because if we toggle one pin on, it assumes we want to toggle all of the others off.

To toggle all of the pins on or off, we'd just have the same function, with the same for p in range(8): loop, but exclude the if p == pin: and else, as follows:

In the Explorer HAT pro Python plugins module that I've written, there's a ShiftRegister class that can be used to control the shift register with a number of methods of the class (they're just functions that belong to the class). This allows us to create objects assigned to a variable, e.g. shiftreg = plugins.ShiftRegister(), and then run the methods within the class, like the demo method, with shiftreg.demo().

Other methods of the ShiftRegister class

Here's the full list of methods available so far in the ShiftRegister class:

It's simple to add your own method to the ShiftRegister class. You just need to remember a few things. First, it needs to be within the ShiftRegister class, i.e. indented a level further in than the first line of the class, where it says class ShiftRegister:. Next, it looks just like a normal Python function, in that it begins with def method_name():, except that you must always pass self as the first argument like so: def method_name(self, arg1, arg2):. You need to pass self even if you're not passing any other arguments in, as I have in the previous example.

I won't show you how to do that here, and you'd have to modify the code to do it, but I encourage you to give it a try!