Getting started with Enviro pHAT

Enviro pHAT is an environmental sensing board that lets you measure temperature, pressure, light, colour, motion and analog sensors. It's the perfect board for building a tiny monitoring station with Pi Zero that you can stick on a shelf and keep track of conditions in the room. 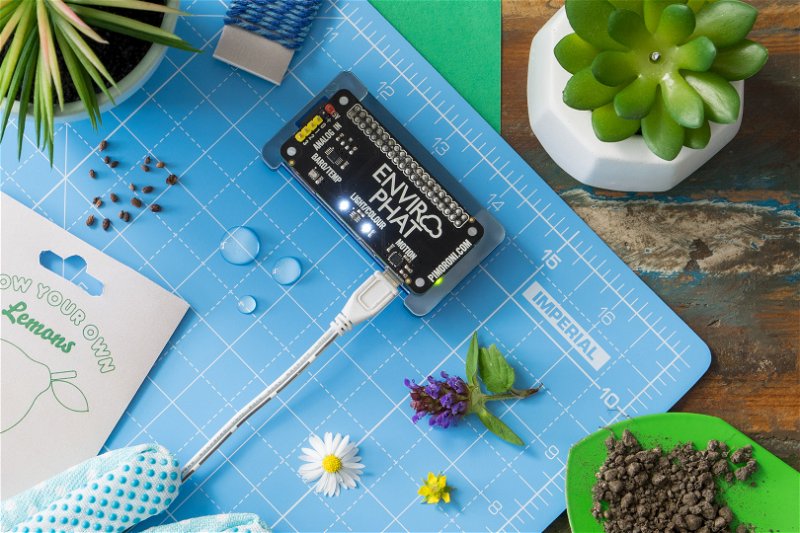 Your Enviro pHAT will come un-soldered, with a strip of 2x20 pin female header provided. You'll need to solder that on to Enviro pHAT, to allow you to connect it to your Pi's male header.

We've got a handy guide here on how to solder pHATs, so check that out if you're new to soldering. 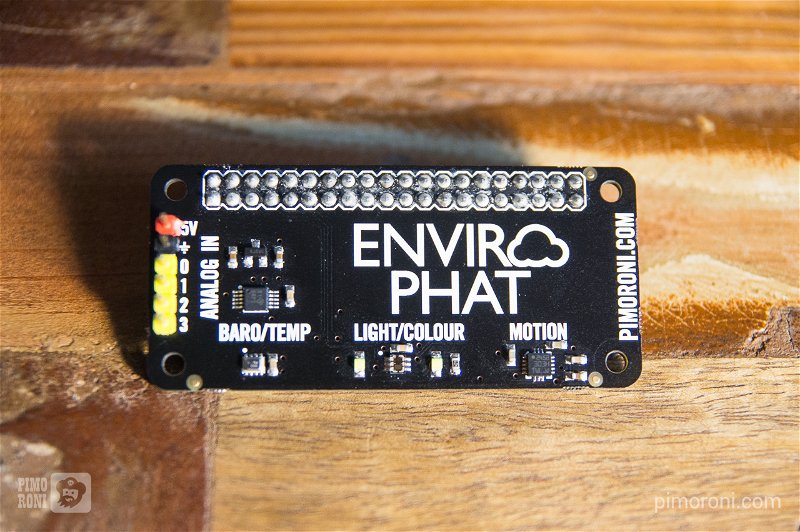 As with most of our boards, we've created a really quick and easy one-line-installer to get your Enviro pHAT set up. We'd suggest that you use this method to install the Enviro pHAT software.

Once that's done, it's probably a good idea to reboot your Pi to let the changes propagate.

The Python library is partitioned into separate modules for light, motion, weather, analog and leds.

To import the light module, that we can then use to read the overall light level and RGB colour values, type the following:

The light module has two methods (well, more than two, but you'll probably not need the others) that you can use.

The first is .light(), which gives the overall light level from the clear reading. Type the following to print the light level value:

The second is .rgb(), which gives the RGB colour values. Type the following to print out the RGB values:

You'll notice that this prints out a tuple of the RGB values and we can easily unpack this to three separate variables r, g and b in a single line:

To get a more accurate colour reading, we've added two white LEDs either side of the light/colour sensor that should reflect more light back to the sensor. You can turn these on by typing:

And to turn them off again:

Try holding something coloured above the colour sensor, above the text reading 'LIGHT/COLOUR' and see how the RGB values change. 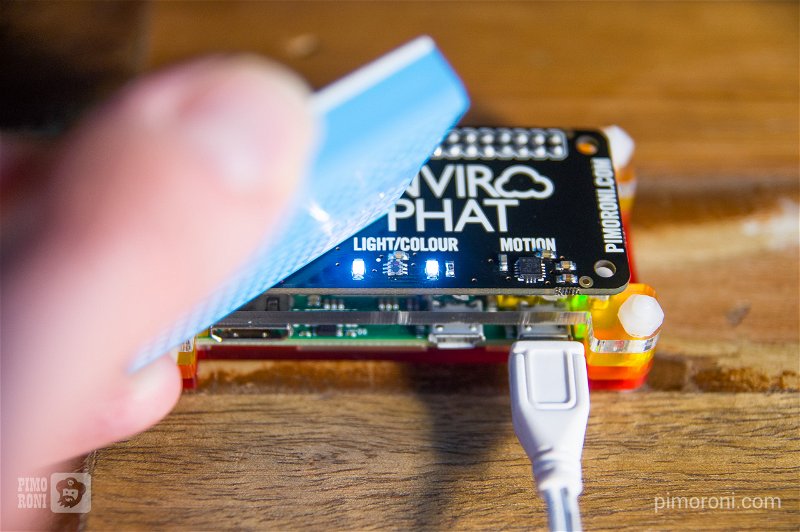 Just like the light module, we can import the weather module by typing:

The BMP280 sensor can read temperature and pressure, and the weather module provides two methods for reading these values.

To read the temperature in degrees Celsius, type the following:

And to read the pressure in hPa (hecto Pascals), type the following:

Try touching the BMP280 on Enviro pHAT, just below the text that reads 'BARO/TEMP' and then print the temperature again to see how it changes. 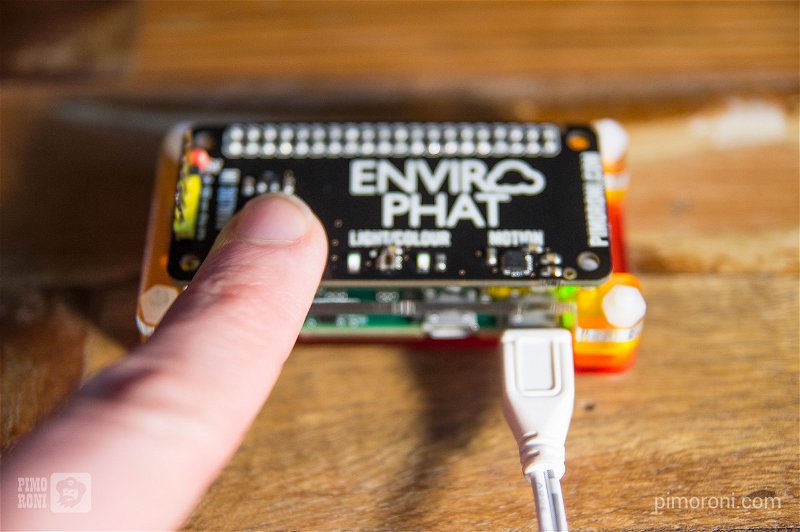 The LSM303D accelerometer/magnetometer sensor can detect orientation, motion and heading (compass position) of the board.

To import the motion module, type:

Similar to the light.rgb() method, motion.accelerometer() returns a tuple of x, y and z variables for the three axes of movement.

To read the accelerometer values, assign them to the variables x, y and z, and then print them, type the following:

Try using a while loop to constantly print the x, y and z variables, and then move Enviro pHAT around and see how the values change:

This will print out the accelerometer values every 0.1 seconds.

The heading is equivalent to a compass position, although some fiddling is required to convert it into numbers where north is at 0 degrees and south at 180 degrees.

To read and print the heading, type:

If you'd like to set north to 0 and then calculate accurate compass headings, then you can do the following:

Point the Enviro pHAT with the text the right way up (relative to you) towards north, then take a heading reading:

Now, if you do the following, you can calculate the correct compass heading:

We just subtract our north reading from the current reading and then take the modulo 360, so that the values wrap around the compass correctly.

The ADS1015 sensor on Enviro pHAT is an analog to digital converter (ADC) that can read analog signals with 3.3V logic, over 4 channels. This means that to use analog sensors that use 5V logic, we need to use a voltage divider to drop the 0-5V output from the analog sensor down to 0-3.3V.

In the example below, we're using three 1 kΩ resistors, and your analog output (from the sensor) would be connected to the red wire, ground to the black wire and the Enviro pHAT analog input to the blue wire. 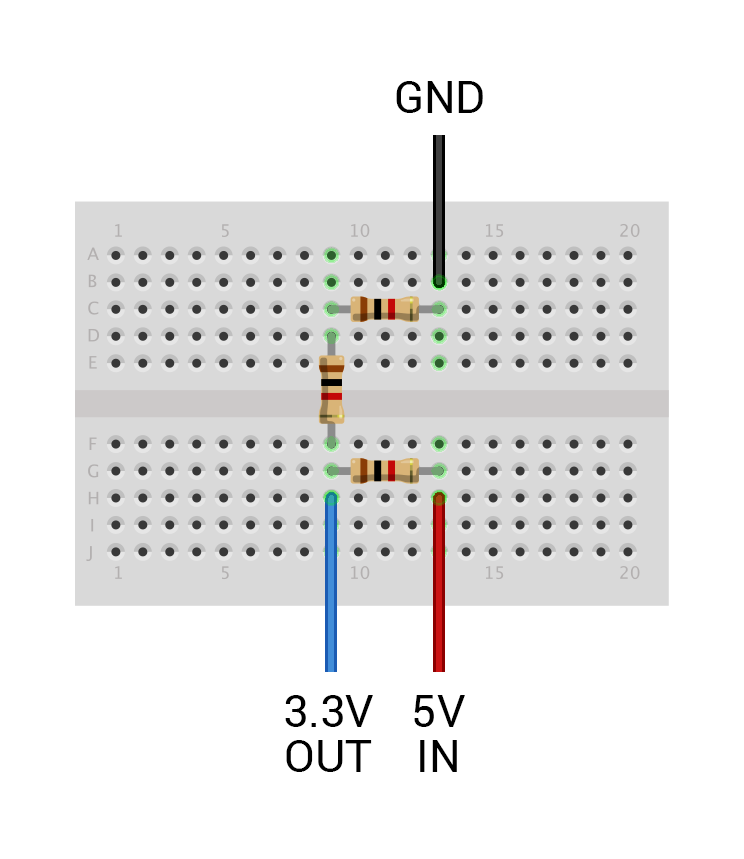 To read the analog values from the ADC, just type:

Or to read from just one channel, e.g. channel 0, type:

Logging the values from the sensors on Enviro pHAT is super-easy!

Here, we'll just poll the sensors at a given interval - every second - and then write those values to a tab-separated file. Tab-separated files are great for doing some analysis of your data further down the line but, if you wanted to do this over a longer period of time and with large amounts of data, you'd probably be better off setting up a SQLite3 database or similar in which to store the data.

Here's all of the code we'll use to log our data, and then we'll go through, line-by-line, what it all does:

First, we import time to allow us to add a one second delay between readings, and the modules from the envirophat library that we need.

Next, we open an output file, into which we can write our data, called enviro.log, and write the column headers to the file.

We're going to put our while True: loop into a try clause, so that we can clean things up later in the except KeyboardInterrupt clause, which will activate when you control-c exit the script.

We're taking readings from each of the sensors and, for the rgb and acc readings, we're doing a little fiddling to reformat the tuple converted into a string to remove the brackets at the beginning and end, and remove the spaces.

We switch the LEDs on before the colour reading is taken, and then off again after, because if we had them on while the lux reading was being taken, it might affect the reading taken and not reflect the true ambient light level.

The values are written to a new line in the output file, using the % placeholder notation, to make the syntax a little neater. The tabs are represented by \t and new lines by \n.

time.sleep(1) introduces a 1 second delay before the next reading is taken, although each iteration of the while loop will take some time, so the readings won't be taken exactly a second apart.

You may also want to add a timestamp to your readings. You can do this with something like the following:

Last of all, we have our except KeyboardInterrupt clause that activates when we exit the script with control-c:

This switches off the LEDs and closes the output file.

Why not try to store the sensor data in a SQLite3 database, and then create a web front-end to display the data?

There are loads of possibilities with Enviro pHAT, especially when coupled with some of our other pHATs and HATs like Scroll pHAT, Unicorn pHAT and Display-O-Tron HAT.

Getting started with Enviro pHAT

Learn how to install and get started with your Enviro pHAT