Getting Started with Four Letter pHAT

This tutorial will show you how to solder the 14-segment displays, install the Four Letter pHAT Python library, and then walk through its functionality. You'll learn how to display four letter words (not that sort!!), numbers, and a neat little example of how to use it as a clock. 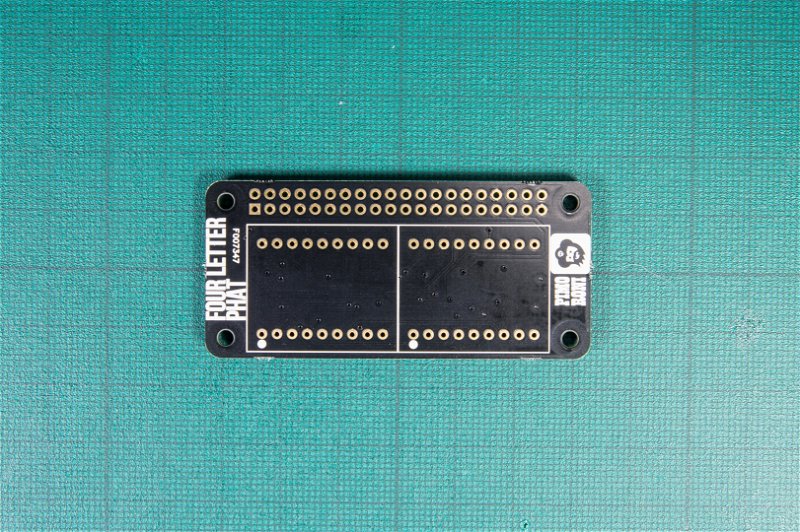 Now, take one of the 14-segment displays and turn it so that the decimal points after each digit are towards the bottom. Carefully, line up the pins on the display with those in the left hand rectangle and push them through, so that the display sits flush to the PCB, as in the images below. You might notice that there is some protective film on the displays; don't peel this off until the very end! 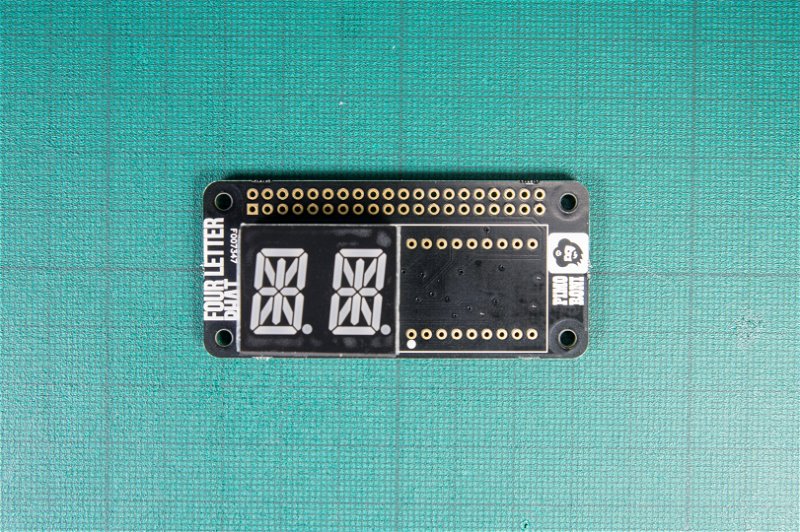 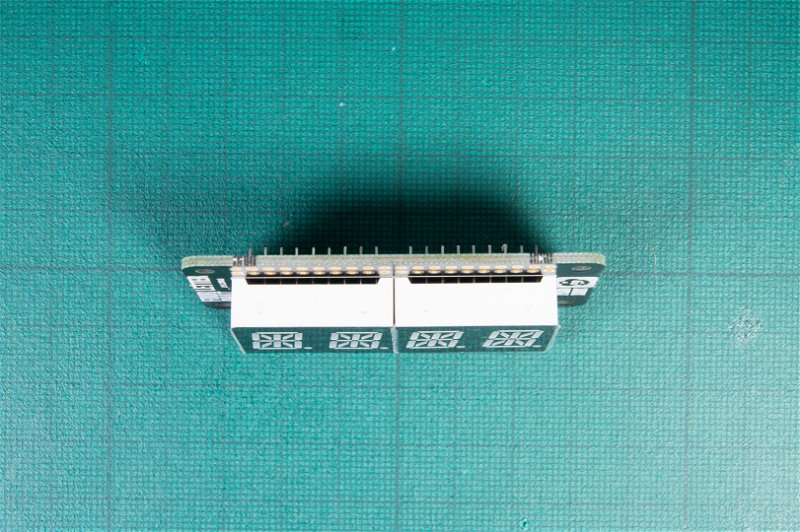 Once you've seated both of the displays correctly on the PCB, flip the whole thing over and solder all of the pins. Using a pair of tin-snips, trim any excess from the pins that protrude through the back of the PCB. This is important, as if you don't then they might short out on components on the top of your Pi. 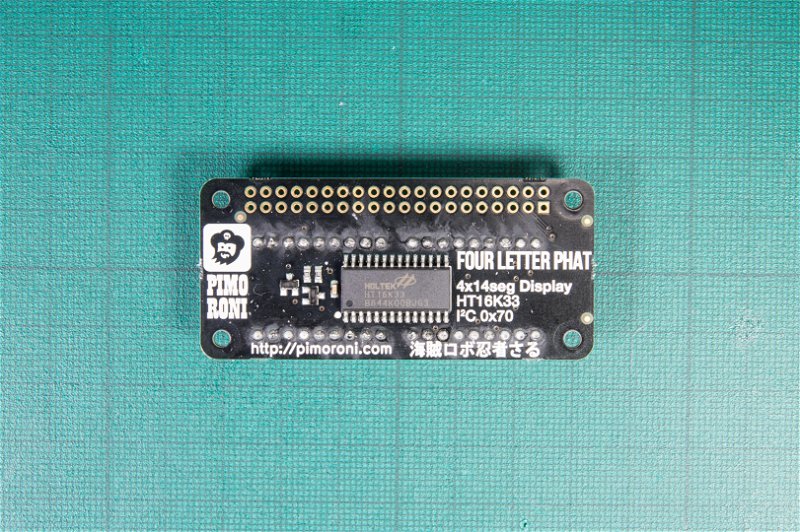 You'll also need to solder the header to your Four Letter pHAT, then you can follow our guide to soldering pHATs here. 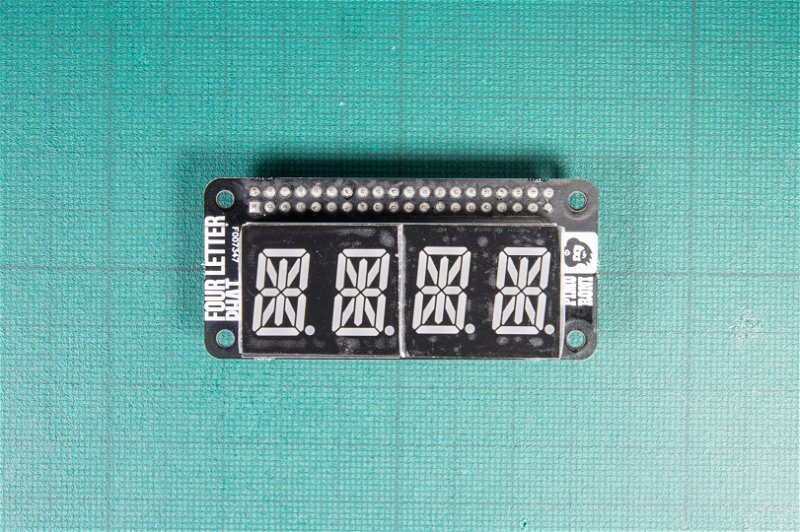 Lastly, peel the protective films off the two displays. 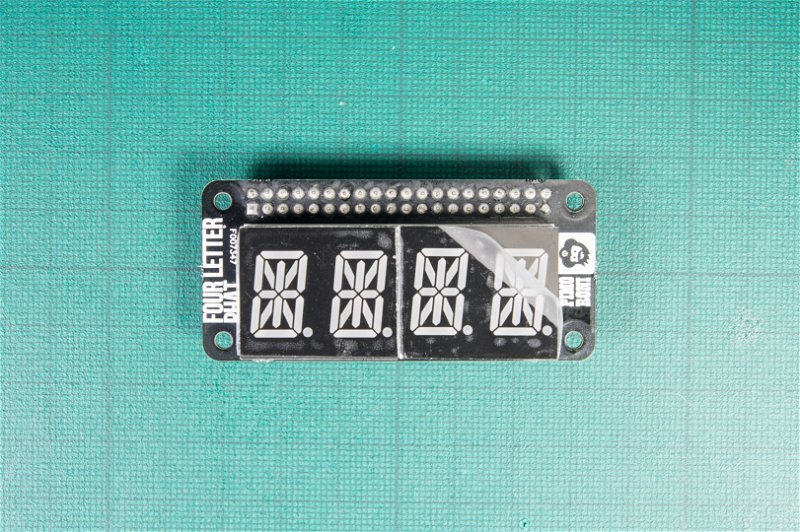 To begin, we'll see how to display characters on Four Letter pHAT. Before we do anything, we'll have to import the fourletterphat library. Type the following:

We'll look at the set_digit() function first, that allows you to set individual digits. You pass it a position (the digit from 0 to 3) and the character that you want to display, be it a number, letter, or other character. We'll set the first digit to A: 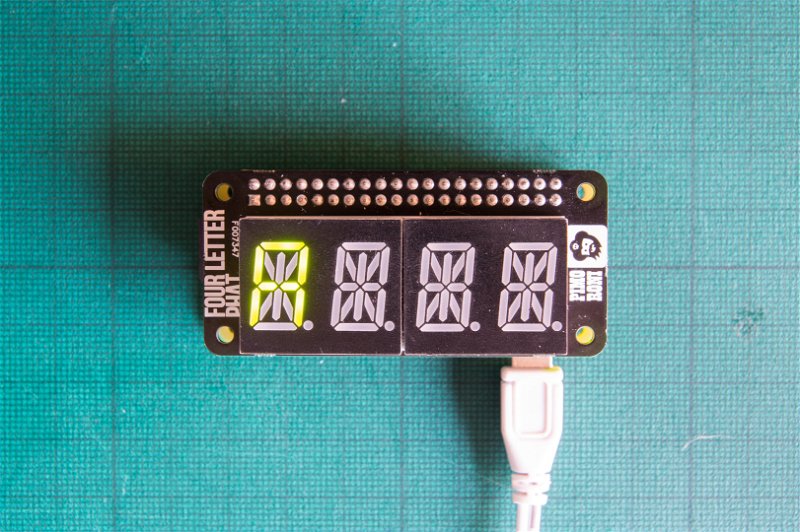 Notice that we had to call the show() function after we set the digit. You have to call show() whenever you want to update the display with the data that you've set. You could have called the set_digit function another three times to set digits 2, 3, and 4 to B, C, and D, before calling show(), but there's an easier way to do that...

The print_str() function allows you to write to all four digits at once (or also fewer than four). We'll write the word YARR to the displays now: 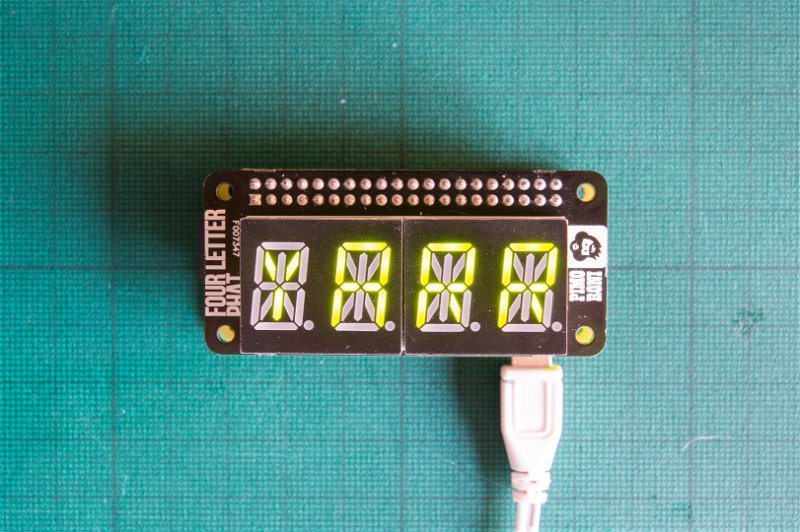 The decimal points to the right of each digit on Four Letter pHAT can be set independently of setting the digits themselves. This is handy if you're doing something like setting a time and blinking the decimal point on and off to indicate the seconds, as we'll see later.

The set_decimal method sets the decimal points on and off, and it needs to be passed the index of the decimal point (from 0 to 3, left to right) that you want to set, and a Boolean value - True / 1 or False / 0 - to set it on or off respectively.

Type the following to set the decimal point after the second digit (index 1) on: 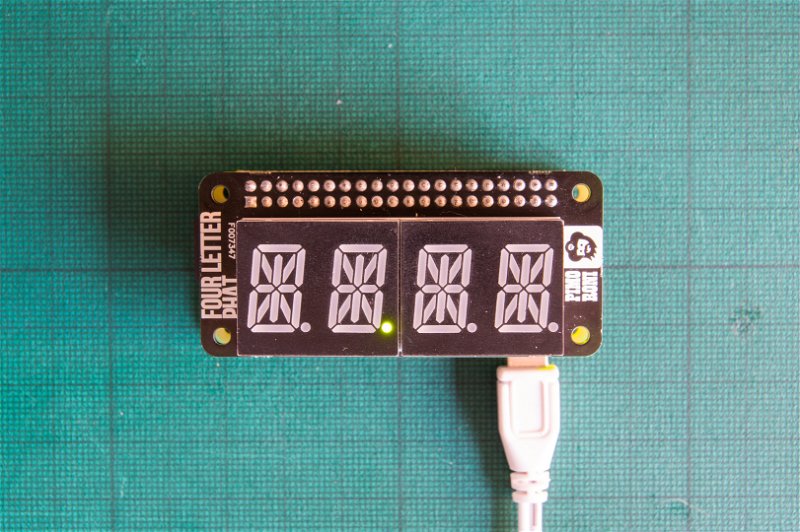 There are two different functions for displaying numbers - print_number_str() and print_float(). Each has its advantages. print_float() has the advantage that you can display a positive or negative floating point (decimal) number without converting it to a string and you can specify the number of digits after the decimal point. print_number_str() is more straightforward, and can be used for displaying integers or floating point numbers with a set number of digits after the decimal point. We'll try both here: 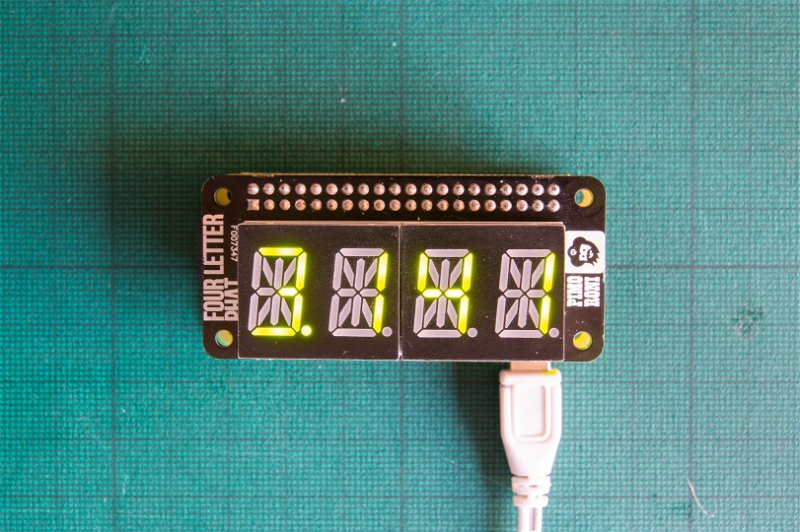 You'll notice that the decimal point at the appropriate place lights automatically. If you have a number that was less than 4 digits, for example 3.14, then it would be right justified by default. However, if you pass justify_right=False, i.e. flp.print_number_str("3.14, justify_roght=False") then it will be left justified.

Now let's try the print_float() function. You can use this directly on a floating point number without first having to convert it to a string. Type the following: 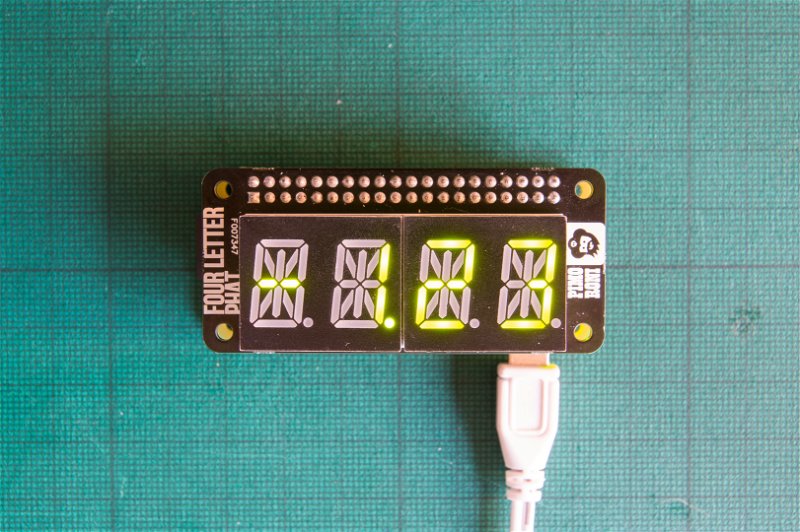 Again, note that it is right justified by default if your float is less than 4 digits (or a negative number with 3 digits in this case). Again, the justify_right=False option will allow you to left justify a number. The print_float() function has another option to specify the number of digits displayed after the decimal point. Try printing the above number again, but this time use flp.print_float(-1.23, decimal_digits=1).

We'll look now at how to build a simple little digital clock that even blinks the decimal point separator on and off to show the seconds, in just 12 lines of code!

Here's the code, and after, we'll break it down bit by bit to see what it does:

As well as importing the fourletterphat library, we import the time library, as we'll use it to get the current time.

Our program runs continuously inside a while True: loop. Each time the loop runs, the first thing it does is to clear the display with flp.clear().

To get the time in hours and minutes, we use a handy function of the time library, time.strftime() that allows us to format the date and time in lots of different ways. In this case, we use "%H%M" which will give us the hours and minutes in 24 hour format, for instance 1627 for 4:27pm. We use flp.print_number_str(str_time) to set those digits on the display.

Finally, we call flp.show() to show the digits on the displays, and add a small delay of 0.1 seconds with time.sleep(0.1). 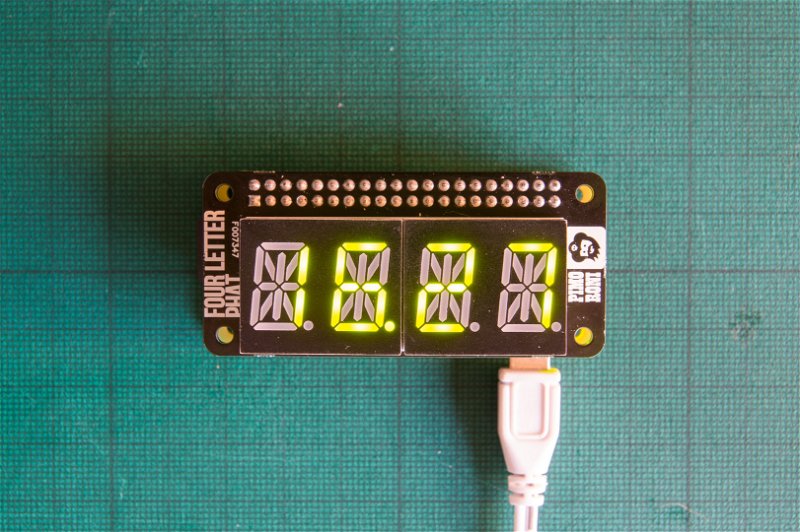 Note that you'll need to have connected your Pi to an internet connection to sync. the correct time.

Getting Started with Four Letter pHAT

Learn how to assemble, install, and get started with your Four Letter pHAT