In this tutorial, we'll look at how to set up and use your shiny new HyperPixel 4.0. It's all fairly straightforward. Note that you'll need a keyboard, mouse, and keyboard to set the software up, and a Phillips screwdriver to attach the metal standoffs to your Pi.

When you open your HyperPixel 4.0 box, you'll find the following:

We'll start with how to attach your HyperPixel 4.0 to your Raspberry Pi. These instructions apply to the larger Raspberry Pi models, and we'll cover what to do with a Zero or Zero W after.

Attaching your HyperPixel 4.0 to your Raspberry Pi

Note: you should all of the following section with your Pi powered off.

The first thing to note is that your HyperPixel 4.0 screen has a protective film on the screen. It's best to leave this on while you're attaching it, to prevent accidentally scratching the glass. 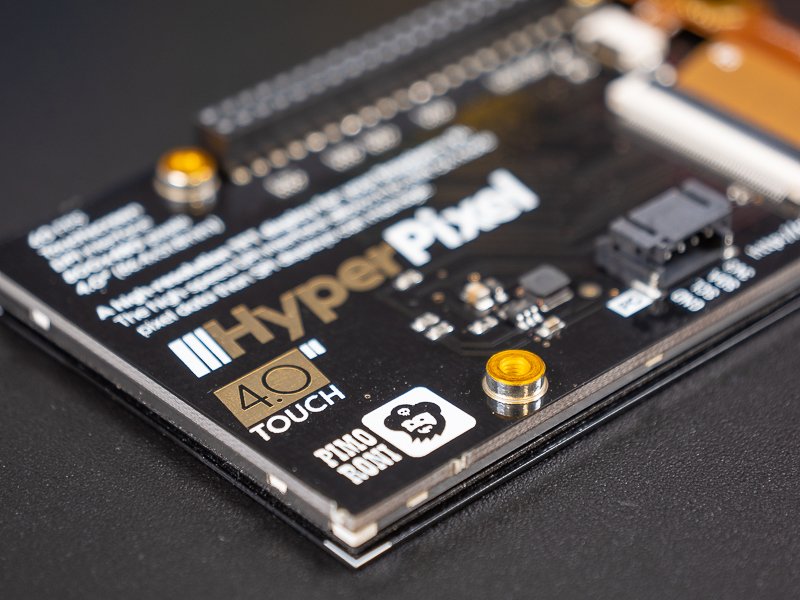 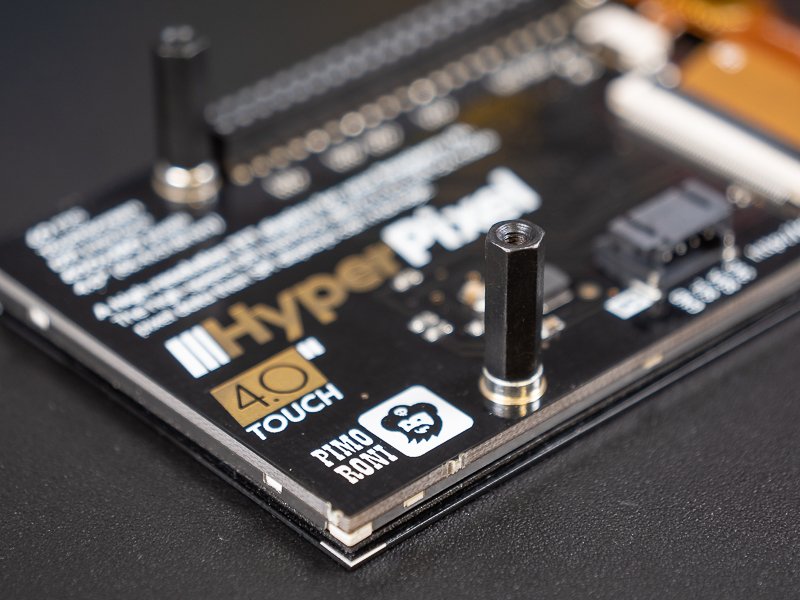 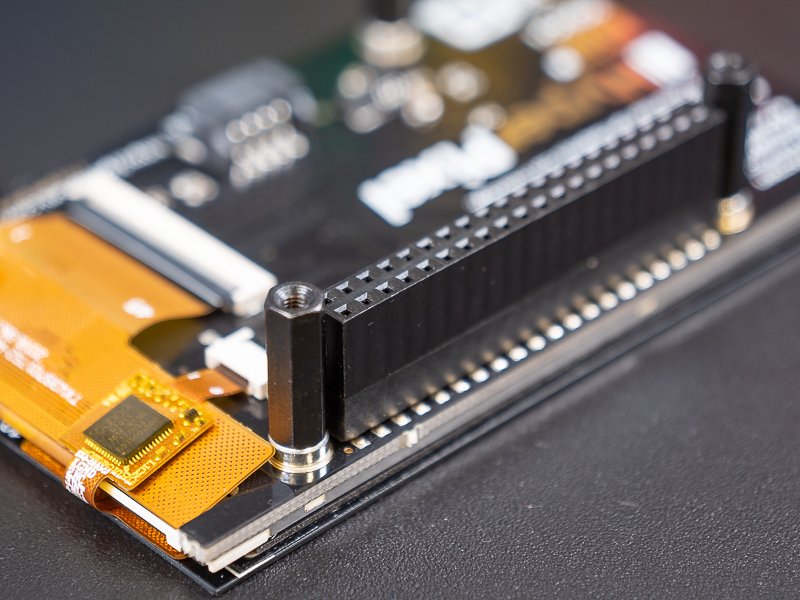 Now, push the extended header on your HyperPixel 4.0 onto your Pi's GPIO pins, making sure not to press on the centre of the HyperPixel's display but instead holding the edges of the display and PCB and pressing gently but firmly. Make sure that both headers are aligned properly; you can check this by looking at the alignment of the standoffs with the mounting holes on the Pi. 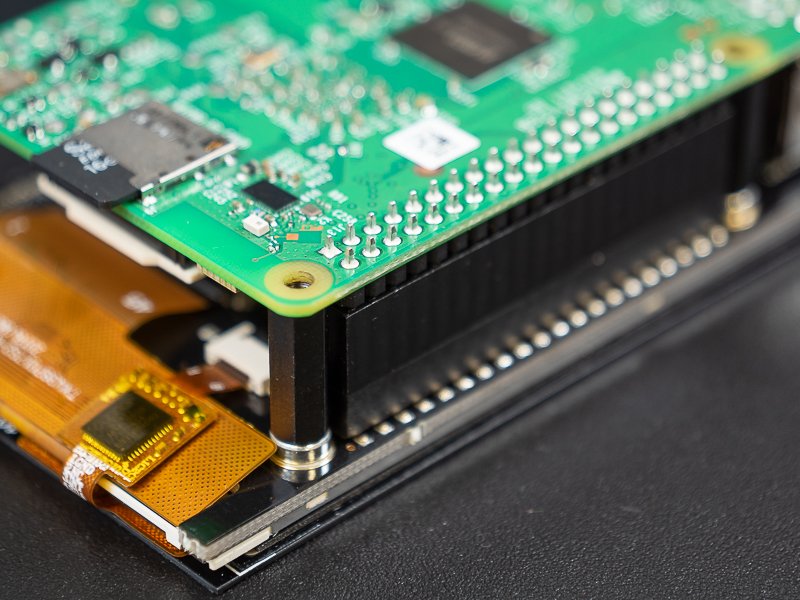 Flip your Pi over and secure the standoffs with the four metal screws, using a Phillips screwdriver. You can peel the film off the front of the display now, if you wish. 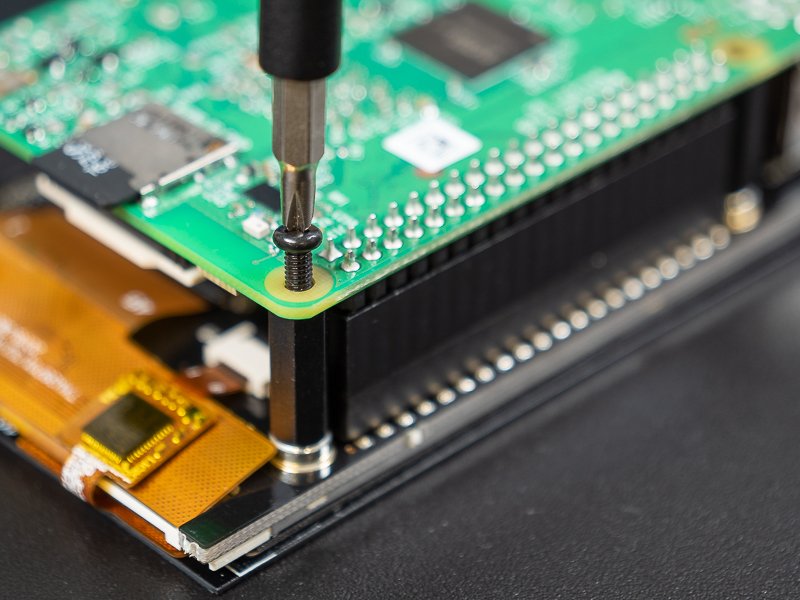 Using it with a Raspberry Pi Zero or Zero W

If you're using a Raspberry Pi Zero or Zero W, then you won't need to use the additional extended header, and just plug it straight onto the pins!

Setting up your Raspberry Pi

Download Raspbian with desktop and then use Etcher to burn the operate system onto a micro SD card that's at least 8GB. We sell a NOOBS micro SD card that comes pre-loaded with a range of operating systems, including Raspbian, so if you're not sure what you're doing then you could grab one of them instead.

You'll need an HDMI display, keyboard and mouse connected for the next part, until the HyperPixel installation is complete, or you could follow our guide on how to set up a Raspberry Pi headlessly, and then use SSH to install the HyperPixel software.

Pop the micro SD card with Raspbian installed into the slot on the underside of your Pi and plug your power supply into the micro USB port; the Pi should start booting up.

You'll need to be connected to the internet with either an ethernet cable plugged into the ethernet socket on your Pi, or to a Wi-Fi network. If you're booting into Raspbian for the first time, then it will guide you on connecting to Wi-Fi.

⚠️Changes are afoot! If you're using the latest, greatest version of Raspberry Pi OS Bullseye dated 04/04/2022 or later it will come with Hyperpixel drivers baked in - find out more at the link below:

For instructions for the legacy installer, read on!⚠️

We've put together a nifty one-line installer for the HyperPixel 4.0 software that'll get everything configured properly for you. If you're an advanced user, and you'd like to know what the code is doing, then you can look at the GitHub repository and the install.sh script.

Open a terminal window, and then type the following and press enter:

The installer may prompt you to type y or n and press enter at various points and, if it asks you whether you'd like to reboot once it's finished, then type y to reboot.

Once rebooted, your HyperPixel display should be displaying the Raspbian desktop! Try touching the touchscreen, if you're using the Touch version of HyperPixel 4.0.

If you're not bothered about using I2C, then you're done! If you want to learn more, then read on!

Using the alternate I2C interface on HyperPixel 4.0 (for advanced users)

HyperPixel 4.0 uses literally all of the GPIO pins on the Raspberry Pi, including the standard I2C pins (BCM 2 and 3), but we've broken out pins BCM 10 and 11 as well as 3V3 power and ground, so that you can use I2C devices at the same time as using your HyperPixel 4.0.

You can use some jumper jerky to connect I2C devices to your HyperPixel 4.0, using the 5-pin female header on the underside of the board. If you're using our Pimoroni breakouts then you can solder a piece of right-angle male header on and plug them straight in, or even use one of our Breakout Garden Extender sockets and just plug them straight in.

The nifty trick to using the alternate I2C interface is to symlink i2c-3 to i2c-1 to fool any I2C devices into talking to the alternate one rather than the standard one. Open a terminal, and type:

If you want to undo this, you can simply delete the i2c-1 symlink file by typing in the terminal:

Learn how to connect and setup your HyperPixel 4.0