Getting Started with Touch pHAT

This tutorial will show you how to install the Touch pHAT Python library, and then walk through its functionality. You'll learn how to control the LEDs, how to link functions to button presses, and then how to turn your Touch pHAT into a timer, with the buttons starting, stopping, and resetting the timer. 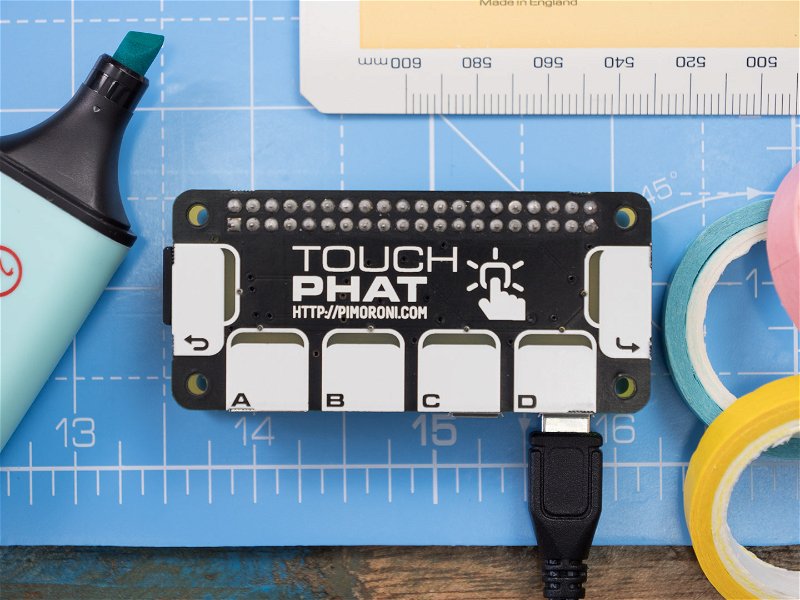 If you haven't already soldered the header to your Touch pHAT, then you can follow our guide to soldering pHATs here.

As with most of our boards, we've created a really quick and easy one-line-installer to get your Touch pHAT set up. We'd suggest that you use this method to install the Touch pHAT software.

Open a new terminal, and type the following, making sure to type y or n when prompted:

Type the following to turn all of the the LEDs on: 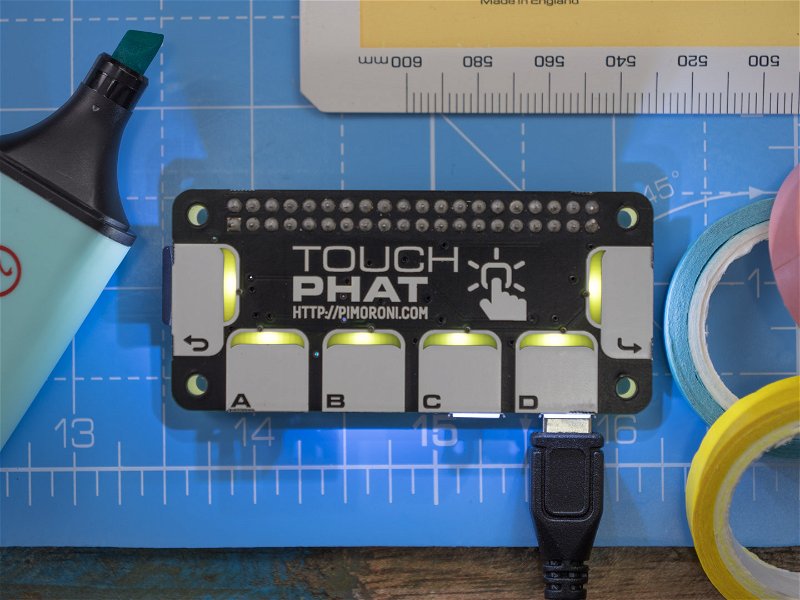 You'll notice that we have to import touchphat to be able to use the functions in the library. The touchphat.all_on() function does exactly as it says and, as you might guess, there's also a touchphat.all_off() function that... turns all of them off again. Try that now:

The touchphat.led_on() and touchphat.led_off() functions allow you to control the LEDs individually. First, we'll turn the first LED on. Type the following:

Note that the LEDs are numbered from 1, and from left to right on the pHAT. We pass the number of the pad we want to turn on or off to the function. As well as referring to them by number, we can use their names on the pads. Try the following to turn that LED (the first one) back off again:

Let's try using a while True: loop now to loop through the LEDs one at a time and turn them on for a quarter of a second and then off again:

You'll see that we imported the time library, which lets us introduce that quarter second delay - time.sleep(0.25). Then, our loop goes through each LED in turn with for led in range(1,7):, and turns the LED on, pauses for a quarter second, then turns it off again. The while True: means that this will run constantly until we type control and c to break out of it.

Button presses on Touch pHAT are linked to functions using decorators. Decorators in Python are a way of linking a bit of code to a function. They are always placed immediately before the def myfunction(): line, and begin with an @ symbol, for instance:

Decorators are used to add functionality to functions. In this case, they link a press of one or more of the buttons on Touch pHAT to a particular function. Let's look at how it works in practice. We'll use the @touchphat.on_touch() decorator and link it to a function called handle_touch() that will print the name of the button pressed. Type the following:

The event variable that we pass in to our handle_touch() function is an object that represents the event that happens, in this case a button press. event.name will give us the name of the button that has been pressed.

Try pressing the buttons and see what happens. This is the basis of using the buttons on Touch pHAT to trigger events, and they could be used to trigger anything that you could achieve with a Python function, from starting or stopping a timer, to triggering a sound to be played, to switching a remote plug socket or light on.

Creating a timer with Touch pHAT

Now, we're going to use Touch pHAT to create a timer, with the "Enter" button starting and stopping the timer, and the "Back" button resetting it.

This is a pretty complex example, but we'll go through what all of the code does, so that you know exactly how it works!

The best way to run this example is to open a new text document and then paste the code below in. Save it as something like timer.py and in your home directory, /home/pi. To run the example, open a terminal and type python /home/pi/timer.py. To stop it, press control and c.

Python libraries that you need to import always get imported at the very top of the program, since a Python program runs in order from top to bottom. We're using the touchphat library, the sys library (we'll use that to display the output of the program), and the time library to do the actual timing.

Next, we create a couple of variables that we'll be using.

The first is one called stopped and it's a Boolean. Booleans can either be True or False. In this case, we set our variable stopped to be True, so that our timer is stopped initially. We'll be using this variable to keep track of when our timer is running or stopped.

The other is called runtime. It'll keep track of the number of seconds that our program has been running, so that we can display it. It's an integer (a whole number) and we'll create it with an initial value of 0.

The easiest way to link the press of a button to a function, as we've seen, is to use the decorator function @touchphat.on_touch(). Here, we'll be using the "Enter" button to start and stop the timer, and the "Back" button to reset it to 0.

Our program will use two functions, one called start_stop() that starts and stops the timer, and one called reset() that resets it. The reset() function is really simple and just sets the runtime variable back to 0. You'll also see that it has global runtime in it. This means that any changes we make to this variable will have effect throughout our program; normally variables that are changed within a function have to be passed back out of (or indeed into) the function to be used elsewhere.

The larger function start_stop() keeps track of whether the timer is running, and also updates the runtime variable. We have to use global again on the start, stopped, and runtime variables, because they'll be used in our main while loop at the end of the program.

If the timer is currently stopped (the stopped variable is True) and the start_stop function is triggered by a press of the "Enter" button, then we want to start the timer. So, we use if stopped: (this is the same as if stopped is True:) to then record the time that the timer has started, start = time.time(). The time library has a bunch of functions, and the time.time() function conveniently gives us the current time in seconds. We also set stopped to False with stopped = False, since our timer is now running.

Our else: statement will apply if the timer is running and the function is triggered again by another press of the "Enter" button. It sets stopped back to True, with stopped = True, as the timer has now been stopped. We also get the time that the timer ran for, (time.time() - start), and add it to our runtime variable with the handy += notation (a += b is the same as a = a + b).

The main part of our program, that will run constantly, is a while True: loop. We put this inside a try: block, so that we can add an except KeyboardInterrupt: that will exit the program cleanly when we press control and c.

Our if stopped and runtime > 0: applies when the timer is stopped and it has previously been running (runtime > 0). To write the current status of the timer, we're using the sys.stdout.write() function rather than the usual print() function. This is because we can overwrite each time on the same line rather than printing out hundreds and hundreds of separate lines as the timer is running. To clear the line each time, we write some blank space with sys.stdout.write(blanks) before we write the status of our timer with sys.stdout.write("Timer stopped: %i seconds\r" % runtime). That will print out the number of seconds that our timer has previously been running. Last, we flush out the standard output (standard output is what displays messages in the terminal) with sys.stdout.flush().

Our elif stopped: will apply when the timer hasn't previously been run or has been reset to 0, so that stopped is True and runtime is equal to 0. We simply display a little message saying that the user should press "Enter" to start the timer: sys.stdout.write("Touch enter to start!\r"). Again, we write some blanks before and flush the standard output after.

At the very end of our while loop, we introduce a little delay so that it doesn't run too frequently, with time.sleep(0.1). After all, our timer is only updating every second so, in fact, we could probably increase this value a little.

With a Mini Black HAT Hack3r you could add a Four Letter pHAT to give a physical readout of the time, or one of our other LED display pHATs like Micro Dot pHAT, Scroll pHAT HD, or Unicorn pHAT.

Touch pHAT is great for adding a physical interface to all sorts of projects, far too many to list here. It's perfect for using as a lighting controller, in conjunction with some cheap Wi-Fi-enabled smart lights. You could use it as a controller for a Pi-powered turtle robot, where the buttons are used to program the robot's route. Or why not use it as controls for a Pi-powered camera booth that creates animated GIFs and then tweets them?

Getting Started with Touch pHAT

Learn how to install and get started with your Touch pHAT