Getting Started with Tufty 2040

This tutorial will show you how to plug things in, how to get to grips with the built in demo programs and how to start programming your Tufty with MicroPython.

The easiest way to supply Tufty with power is via some good old fashioned double or triple A batteries, connected in series. You'll need a battery holder with a JST-PH connector to be able to plug it in. We'd recommend a 3 x AAA battery pack which should give you enough juice to keep going for a few days conferencing without being too bulky. 3 x AA batteries will also work!

2 x AA or AAA batteries will only work if you're using non rechargable batteries - the voltage from 2 rechargeable (NiMH) batteries won't be enough for Tufty's screen.

If you're using AA or AAA batteries you'll see the backlight on the screen dimming when the batteries run low (below 2.9V). 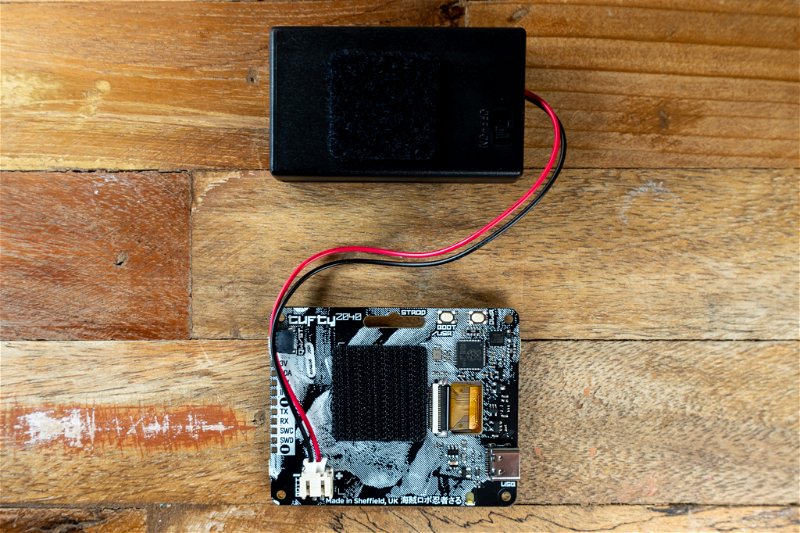 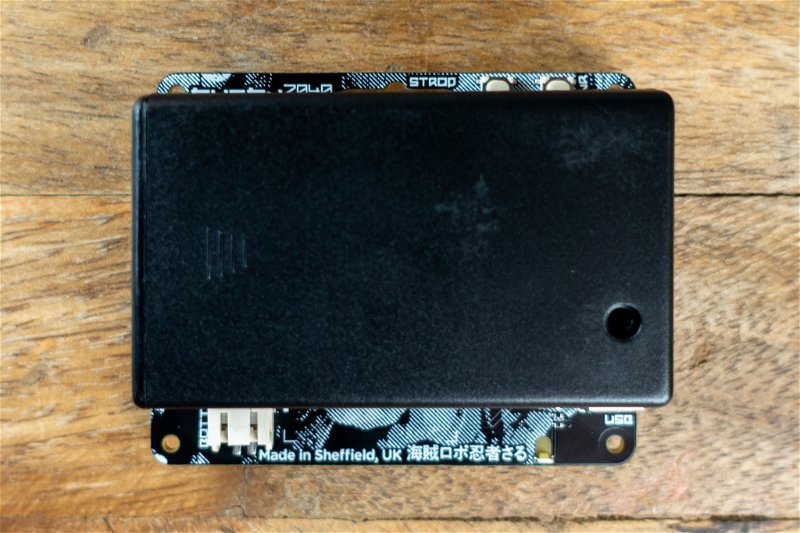 USB battery packs are probably a bit heavy for dangling round your neck, but they might be useful for powering Tufty from your pocket or your bag, if you don't want to stick on a battery pack.

If the person wearing the badge is an adult who knows what they're doing with LiPo batteries, it's possible to power Tufty from a LiPo battery. Our hard case Galleon LiPo batteries (coming soon 👀) make for a really neat power solution, though you might prefer something larger for longer battery life (400 mAh will only give you around 4 hours battery life, with the screen on at full brightness). 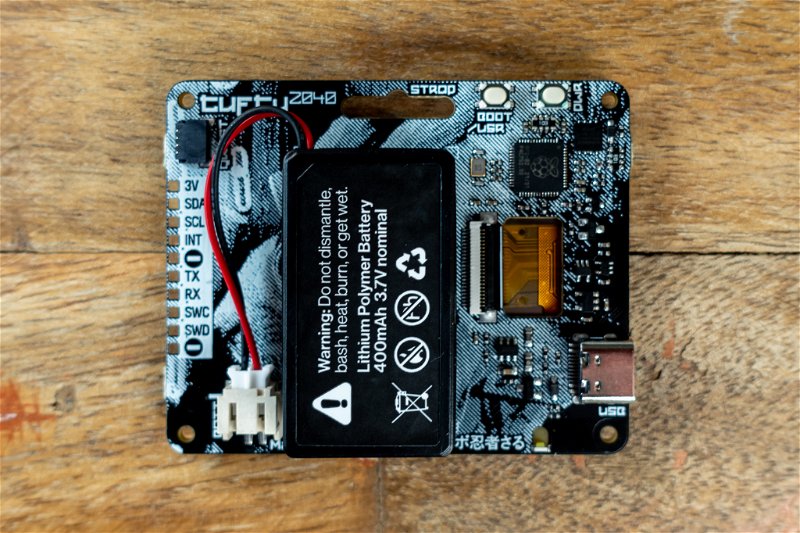 A few more things you should consider if you're using a LiPo:

Our new spruced up Pico Graphics library gives you lots of tools for drawing on Tufty's screen, including drawing text and shapes, rendering images and generating QR codes!

Your Tufty will come preloaded with MicroPython and a suite of examples, but for the all the latest features, tweaks and fixes, download yourself the newest version. You'll need to be running version 1.19.0 or later to have access to all the new Tufty/PicoGraphics stuff.

We've preloaded Tufty with a little menu program and some examples to show you what's possible. Navigate the menu with the arrow up and down buttons, and press A to open up the example. If you save additional MicroPython programs to your Tufty, they'll show up automatically in the menu. You'll need to turn Tufty off and on with the power button to return to the menu once you're done with an example.

If you'd like to modify or replace it, the menu program is saved as main.py (MicroPython runs any script named main.py automatically on boot).

Once MicroPython is installed, Tufty won't show up as a drive on your computer any more. To program it, you'll need to talk to it through an interpreter - we're using Thonny, which is available for Windows, Mac or Linux. 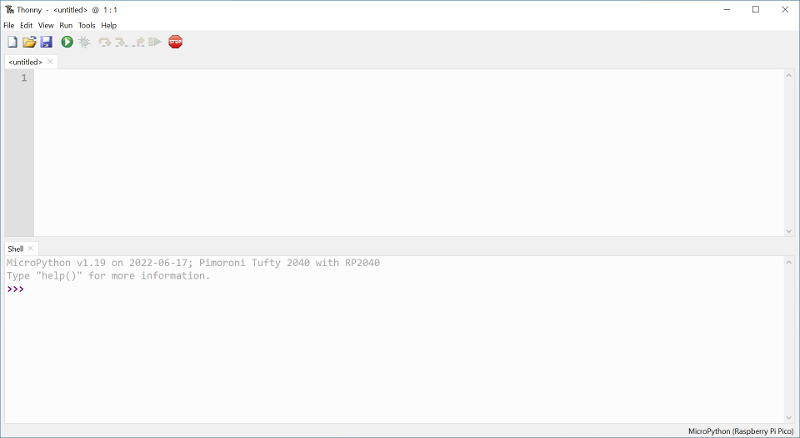 Thonny didn't manage to detect our board automatically - probably because the Tufty image is based on brand new v1.19 MicroPython . We had to specify the port our device was using, you can do this by clicking on MicroPython (Raspberry Pi Pico) at the bottom right, and selecting Configure Interpreter. Select your device under 'Port' - our Tufty was showing up as 'COM20'. 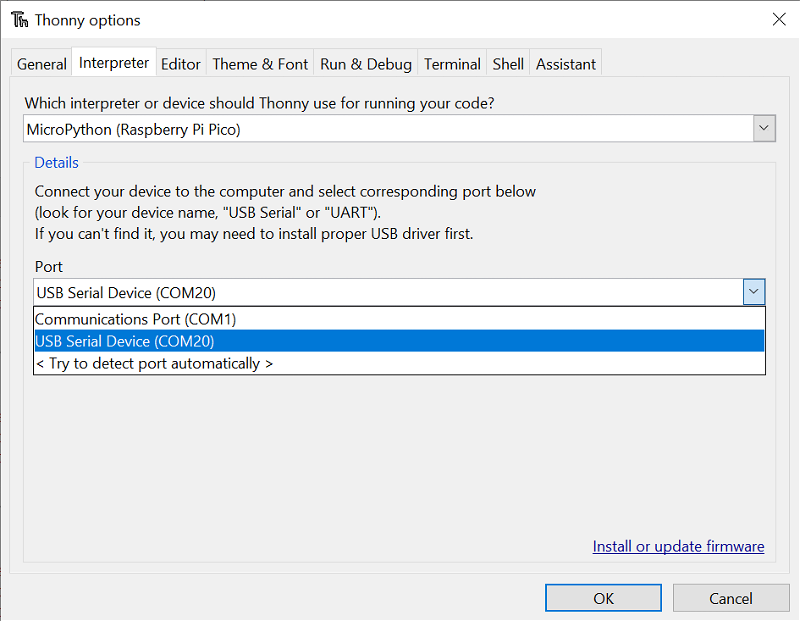 Lighting up the onboard LED

You can light up the white onboard LED with the following code - enter it line by line in the REPL (that's the bottom 'Shell' box in Thonny).

Let's turn off the LED again, to be tidy!

You can also set the brightness of the LED to values between 0 and 1 using PWM.

The built in example button_test.py shows a simple way to read the buttons on Tufty using one of our helper functions. Fancier, interrupt methods are available! (Get Started with MicroPython on Raspberry Pi Pico covers a few different methods).

The light sensing phototransistor on Tufty is wired up to one of the ADC (analog to digital converter) pins. Copy and paste this code into a new tab in Thonny, and then press the green 'run' button.

Readings should start appearing in the bottom shell box. If you go to View > Plotter in Thonny it will show you the results from the light sensor on a graph.

Writing text on the screen

Here's a simple example of how to display text on the screen using our new PicoGraphics library.

The first two lines set up Tufty's screen, you'll need to start any code that uses the screen like this.

The rest of the code does this: 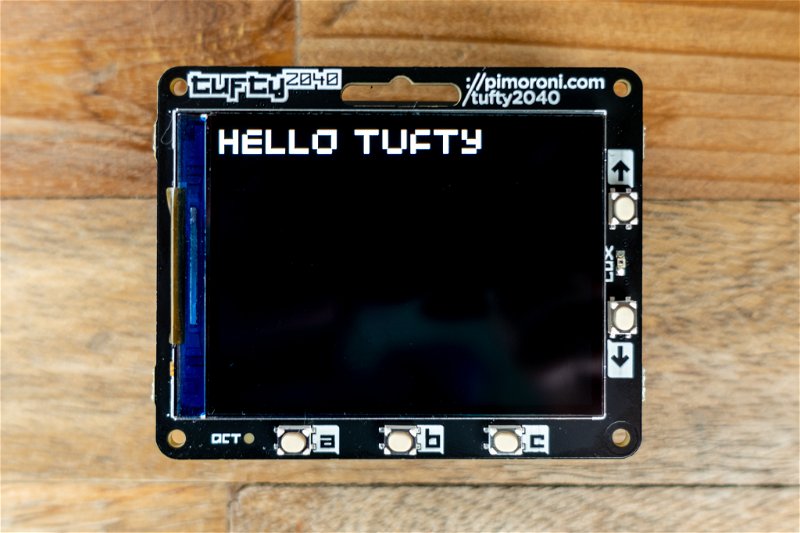 If you try writing more text to the screen, you will find that things you've drawn to the screen buffer will stick around until you overwrite them. To clear the screen and start with a clean slate (we'll first need to create a new black pen):

The default font is 'bitmap6', which is all uppercase and a little small and blocky. Switching to 'bitmap8' gives you upper and lower case and a bit more definition (it also includes more special characters like °) 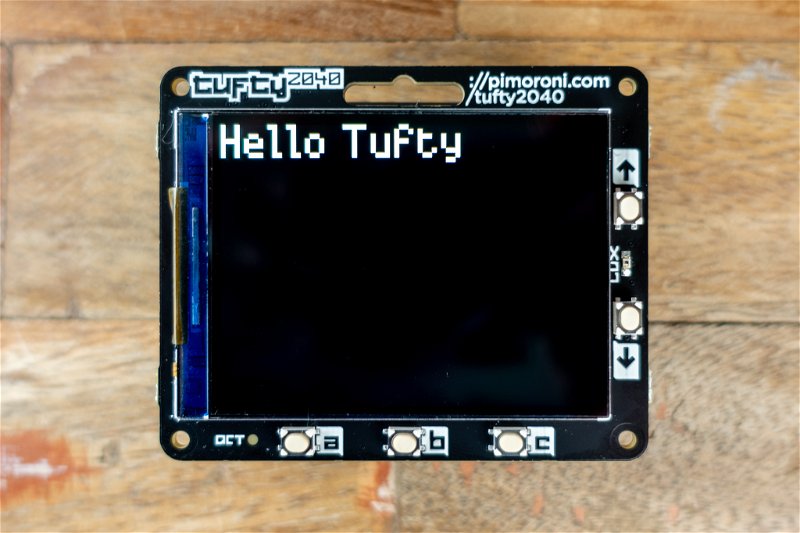 There are more functions in the library for using vector fonts and drawing individual pixels, lines and shapes. Check out the PicoGraphics function reference for more info!

To edit the names and other details in the examples, you can open up the .py example files on the device and edit them. To see the files on Tufty, you will need to have the Files window visible in Thonny, you can do this with View > Files. 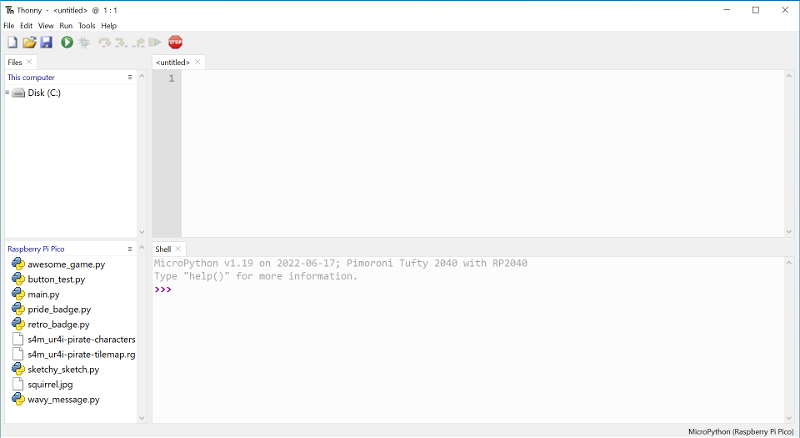 The top box can be used to browse the local files in on your computer, and the bottom box shows the files on Tufty. Double click on one of the examples to open it up in Thonny, and 'save' once you're done editing ( or 'run' if you want to run the code straight away). Here's what editing the text in wavy_message.py looks like! 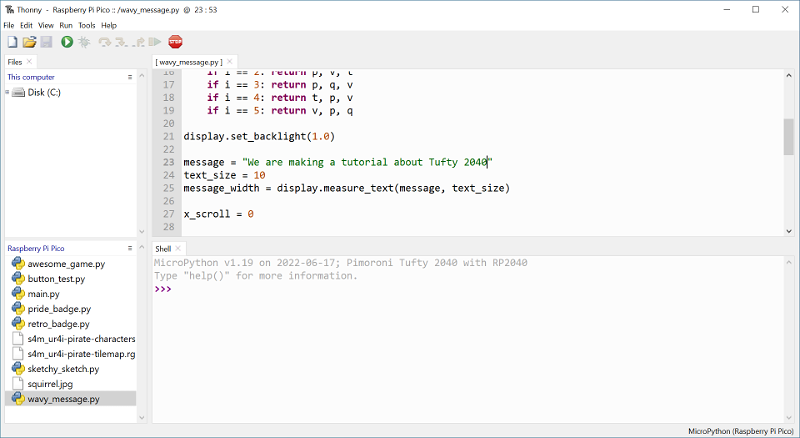 You can also copy files from your computer to Tufty by right clicking on them in the top window and choosing 'Upload to/' (useful for copying across things like images).

We are delighted to finally have jpeg decoding included in Pirate flavour MicroPython. Here's how to get some cat pics on your Tufty, stat!

You should resize your images to 320 x 240 pixels (or smaller) using an image editor (we're using GIMP) before copying them across to Tufty. When exporting your jpeg, we found we had to open up 'advanced options' and untick the 'progressive' option for it to work with jpegdec. 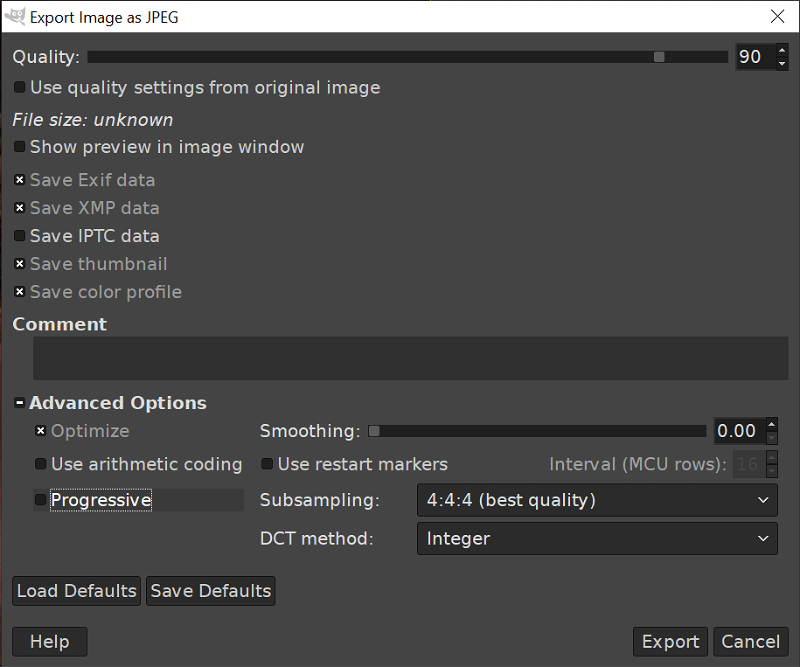 Navigate to your jpeg in the top Files window, right click on it and upload it to your Tufty. Here's how to show the image:

The default PicoGraphics colour palette is 8 bit, so your photo will be dithered into 256 colours to save RAM. Other palette options are available - consult the function reference for details.

Help - I deleted something!

Don't panic! You can find the Python code for all the baked in examples (plus a few extras) on Github.

Once you've got to grips with Thonny and our examples, why not add one of our breakouts into the mix to give your Tufty some sensor smarts. If your breakout has a Qw/ST connector, you can plug it straight into Tufty with a Qw/ST cable (if not, you can use one of these adaptors). There's a list of which of our breakouts are currently supported in our MicroPython build here.

Drop us a line on Twitter to tell us what you and Tufty get up to - we'd love to know!

How do I factory reset?

If you need to delete all your programs from Tufty's flash memory and start again from scratch, you can do that by downloading this special .uf2 file and copying it to Tufty whilst it's in bootloader mode. Once you've done that, you'll need to copy the Tufty MicroPython image across again.

You may also find clearing the flash to be useful if you encounter problems after upgrading to the newest version of MicroPython - just make sure you save any code you've been working on to your computer first!

Getting Started with Tufty 2040

Learn how to program Tufty 2040 with MicroPython and Thonny.