Getting Started with Unicorn pHAT

This tutorial will show you how to install the Unicorn HAT Python library (Unicorn pHAT uses the same Python library as Unicorn HAT), and then walk through its functionality - how to light pixels, control colour and brightness, and then finish with an example of how to MAKE IT RAINBOW!

If you haven't already soldered the header to your Unicorn pHAT, then you can follow our guide to soldering pHATs here.

As with most of our boards, we've created a really quick and easy one-line-installer to get your Unicorn pHAT set up. We'd suggest that you use this method to install the Unicorn HAT Python library.

We'll begin by doing the simplest thing you can do, lighting a single pixel red. This will show you how the pixels are organised and the commands needed to light them in a particular colour.

Before we start anything, we have to type the following to import the unicornhat library:

The import x as y just means that we don't have to type the rather long-winded unicornhat each time we want to call a function, just uh.

Because the Unicorn HAT library is used by both the HAT and pHAT (which is half the size of the HAT), we need to specify that it's the the pHAT that we're using. To do that, just type:

We'll also set the brightness to 50%, since Unicorn pHAT will scorch your retinas at 100% brightness (you were warned!)

Pixels on Unicorn pHAT are organised by their x/y coordinates from the top left hand corner, so the top left pixel is 0, 0 and the bottom right pixel is 7, 3. Remember that, in Python, things are number from 0 rather than from 1. 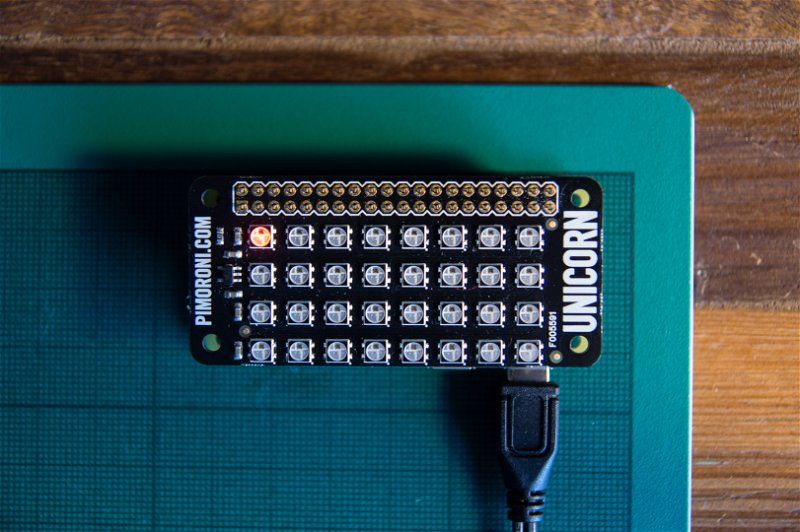 To clear any pixels that you've set, you can use the clear() function, followed by show():

Lighting all of the pixels using a for loop

This time, we'll light the pixels cyan, which is a mix of pure blue and pure green and so can be represented by the RGB colour 0, 255, 255. 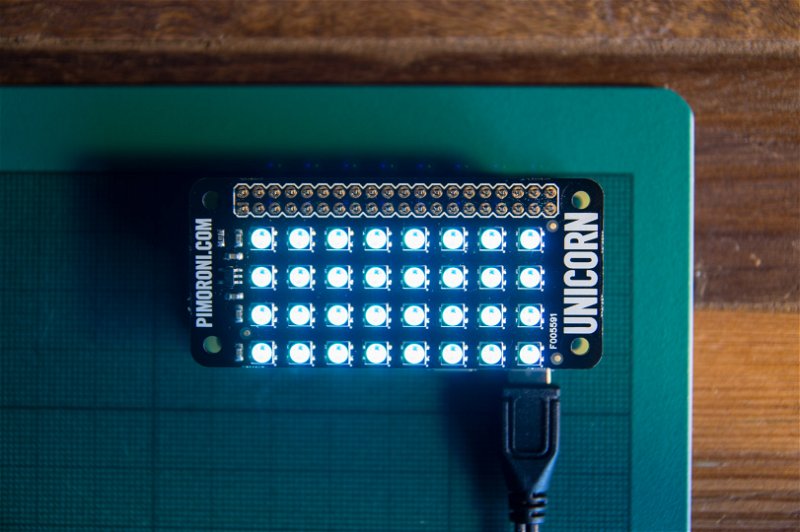 All of the pixels on your Unicorn pHAT should just have lit up cyan!

Now we're going to use a while loop to make your Unicorn pHAT blink pink. All we have to do is continuously light all of the pixels pink, using the technique we just learned, and clear them again, with a short delay, maybe a quarter of a second in between.

This is just the same as in the example where we made all of the pixels light in cyan, except we changed the RGB colour to 255, 0, 255 and we added a couple of lines to sleep for a quarter of a second - time.sleep(0.25) - and to clear all of the pixels - uh.clear().

For our last example, we'll get a little more complex and make a rainbow animate across your Unicorn pHAT. As well as representing colours in RGB, we can also use a system called HSV (hue, saturation, value) that uses the colour wheel to determine the hue of a colour. The colour wheel begins and ends at red, and progresses through all of the other colours of the rainbow in order. Each position on the colour wheel is represented by a compass position in degrees, with red being at 0/360 degrees.

Fortunately, there's a Python library called colorsys that lets you convert HSV colour values to RGB colour values that we can feed into the set_pixel() function. So, to animate our rainbow we just have to continuously cycle around the colour wheel through all of the colours of the rainbow.

Here's all of the code for our animated rainbow. We'll break down what all of it does after. Type the following:

hue = 0 initialises the hue variable with a starting value of 0.0. It will be changed through time inside our while True: loop, but we have to initialise it outside our loop.

Our while True: loop does several things. Most importantly, it sets the hue by taking the time (in epoch seconds, no need to worry about what that is), multiplying it by 100 to scale it up a little, and then taking the modulo 360 of that result (the remainder after dividing the time x 100).

Then, we have two for loops. The first calculates an offset from the pixel number x and our 22.5 degree spacing that we calculated earlier. This offset is added to the hue, the modulo 360 is taken again, and the value is divided by 360.0 to get a number between 0.0 and 1.0 that will be accepted by the colorsys.hsv_to_rgb() function. The rather complicated line that begins r, g, b = is a list comprehension that converts the RGB values returned by colorsys.hsv_to_rgb(), which are values between 0.0 and 1.0 to RGB values between 0 and 255.

The second for loop just sets all of the pixels in each column (y) to the same colour that we just calculated for each x pixel, using the uh.set_pixel() function.

Finally, we call uh.show() outside of our two for loops but still inside the while loop, and then introduce a small delay of 0.05 seconds to set the animation speed with time.sleep(0.05).

Why not try to take our rainbow example further and set a different colour for the pixels in each column too? Or just clamp the range to a portion of the colour wheel that you like?

Getting Started with Unicorn pHAT

Learn how to install and get started with your Unicorn pHAT