Half Hour Hacks 1: The Resistor LED

Half hour hacks are, as you might have guessed, hacks that take around half an hour. They aim to make your electronics tinkering experience either more fun or more convenient.

Our first half hour hack is the Resistor LED. I’m of the opinion that every tinkerer should have at least one of these resistor/LED combos. Whether you choose to buy one off the shelf or make one is up to you; but the latter is certainly more fun! 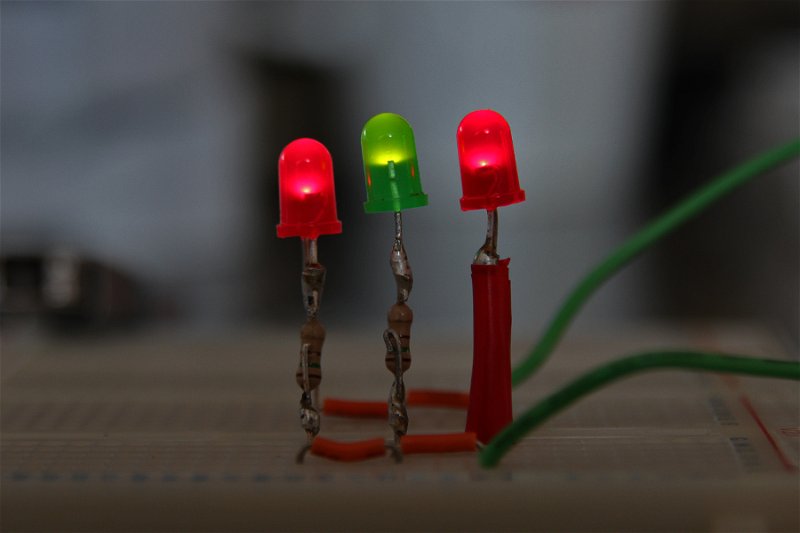 A Resistor and LED combo is basically an LED that has had its long leg replaced with an appropriate resistor. This lets you plug it straight into a breadboard without having to find, and find room for, a resistor.

It’s a straight-forward hack, but the result isn’t great for anything more than simple tinkering and prototyping. Generally the legs of resistors are much thinner and more prone to bend than the legs of LEDs, so it’s not quite as robust.

To create a Resistor LED you will need:

I opted for 150ohm, but the value depends on the voltage you plan on using and the particulars of your chosen LED. See “170pt Projects Part 2: Let there be light” for detailed information on how to pick exactly the right resistor for your LED. If you’re eager to get started and don’t mind a tiny loss in brightness, then you will be fine picking something around 330ohm. 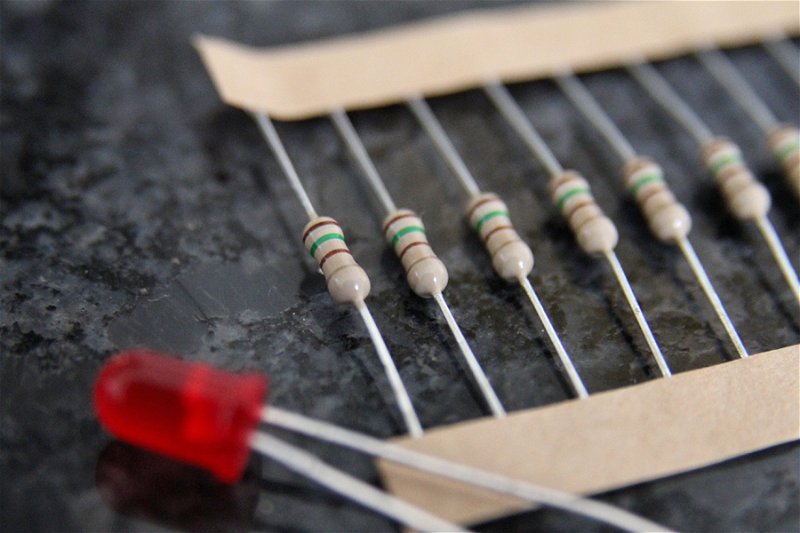 Before jumping in, test your LED and Resistor combo on a breadboard to make sure that they work together and that the LED works at all- I almost managed to finish a Resistor LED before I realised the LED was dud, whoops!

To get started, identify the long leg of your LED; this should hopefully be the anode unless yours is one of the more esoteric form of LEDs that likes to break convention. It’s good practise to place the resistor on the long leg for two reasons: 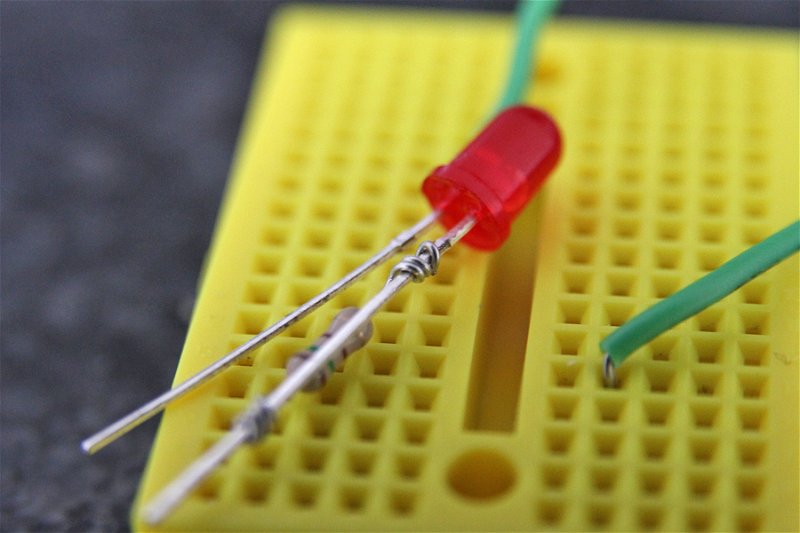 What you should end up with is a resistor with one leg very tightly coiled around the anode of your LED.

Now take the other end of the resistor in a pair of pliers and very carefully wrap it around the same leg on the LED.

Once finished, use your pliers to tuck the coils at each end neatly together.

You should now have an LED with a resistor hugging its anode. Don’t bridge the resistor from one leg to the other.

Plug your LED into a breadboard to hold it secure for soldering, and to make sure that there’s enough free leg to fit into a breadboard. The resistor should be very close to the top of the LED.

Next you need to get your soldering iron ready. Be careful during this stage, because most LEDs don’t like to be overheated for long. Heat up your iron and dab a little solder on the tip to act as a conductor.

Touch the iron gently against one of the coils, let it heat for a second, and dab the solder directly onto the coil. The solder should melt pretty quickly and be sucked into a neat blob around the coil. Remove the solder and keep holding the iron for a second to make sure this happens. 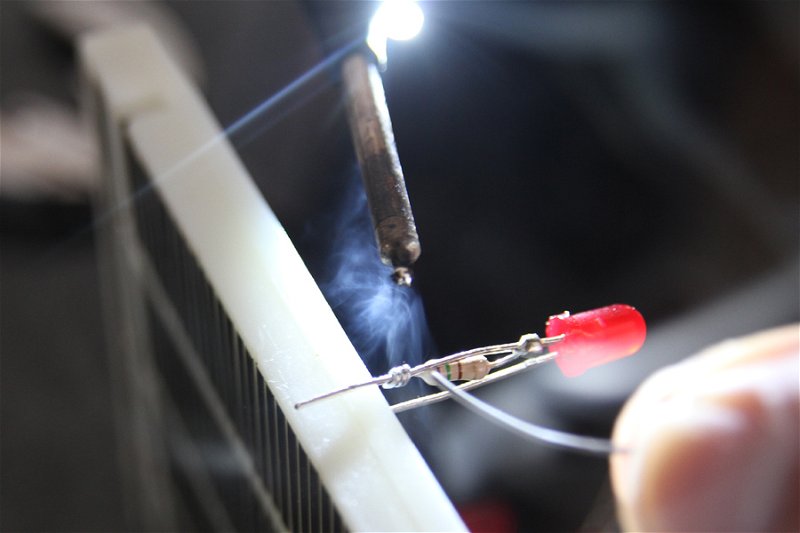 Do the same for the other end of the resistor.

You should now have a resistor, neatly soldered in two places to the leg of your LED.

Now, the astute reader may notice that a resistor soldered in this way will have absolutely no effect on the LED. You’d be right. The LEDs anode is still intact, and will bypass the resistor completely. 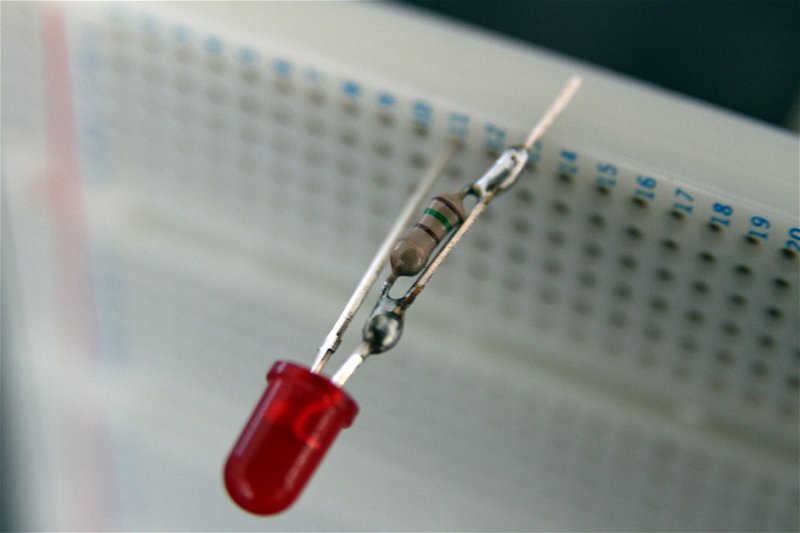 The final step is to very, very carefully take your wire cutters and snip away the part of the LED anode which is between the two solder joints. This should leave you with a portion of leg ( good and sturdy for plugging into a breadboard ) joined by a resistor to the rest of the LED anode.

Wire up a 3.3v or 5v supply and ground to your new Resistor LED and see if it lights up! If it doesn’t, check your circuit against a normal resistor and LED and if that works… well you’ve probably fried the LED. Chalk it up as soldering practise and try again. ( LEDs can be susceptible to heat! ) 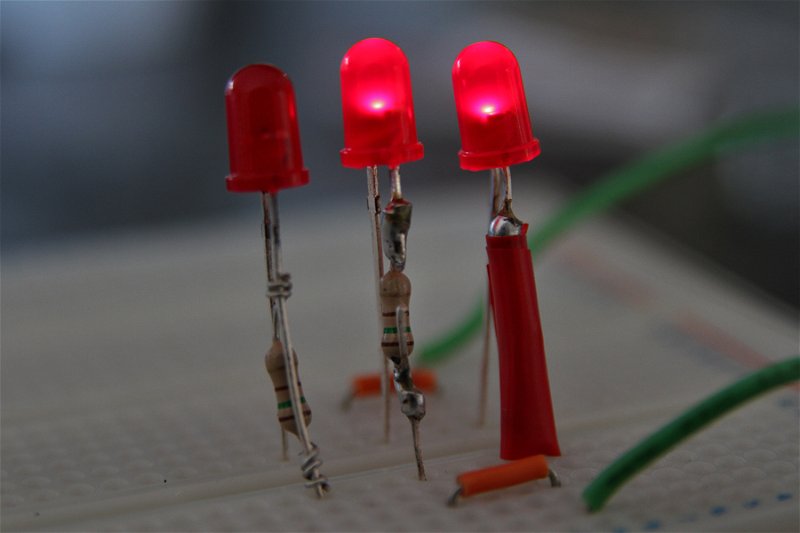 Hopefully, though, your resistor LED will work out of the box. You can now use it for all sorts of things. Try plugging it across the power and ground rails of a breadboard as a power status light, using it as a poor-man’s logic analyzer, popping it straight into an Arduino to try your own variation of Blink, or simply plugging several in a row on a 170pt breadboard- where there isn’t any room for separate resistors.

The resistor isn’t as sturdy as the normal leg of an LED, so be careful when plugging it into a breadboard. I cover mine in a little electrical tape ( I would have used heat-shrink if I had it to hand ) for a little extra support.

Learn how to pair an LED and a resistor into a super useful circuit debugging companion.