This introductory tutorial will show you how you can use a little bit of event-driven programming (wait for event to happen, then do something) to create a fun little version of the Lights Out game using the Explorer HAT Pro.

Explorer HAT Pro is a little breakout board with a mini breadboard in the middle, 4 capacitive touch buttons along the bottom edge, 4 metal capacitive touch pads along the left hand edge and a bunch of IO pins, including analog inputs and motor outputs.

Lights Out is a simple game where the aim is to turn out all of the lights by toggling them on and off. Usually, the lights are in a 5x5 grid but there's no reason why you can't do it with grids of other sizes or even a single row of lights, as we have here. Obviously, it's easier with a row of just 4 LEDs, but fun nonetheless.

The game works as follows. It starts by randomly turning on some or all of the lights. If you tap a light that is on, it toggles off and conversely, if you tap a light that is off, it toggles on. Simple. However, when you toggle a light, the adjacent lights (in this case the ones on either side) also toggle to the opposite of their current state. The game is over when all of the lights are out. The aim is to complete the game in as few moves as possible.

Here's a sneak peak of what you'll be making (click the picture to play video): 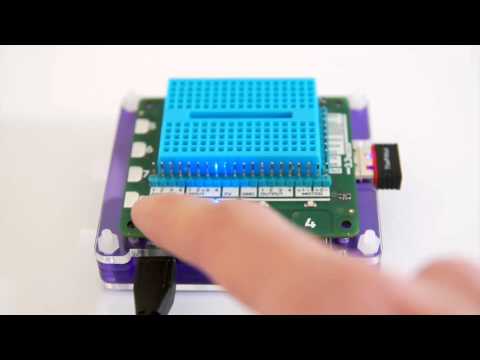 If your Explorer HAT Pro isn't set up yet, you'll need to do the following:

Those commands will install set up I2C and install the Explorer HAT Python library.

Next, you'll want to plug your Explorer HAT Pro into the 40 pin GPIO connector on your Raspberry Pi. You can check it's working by typing the following straight in the terminal:

That should light up all four of the LEDs on the Explorer HAT Pro for a second and then switch them all off again. If that works, then you're good to go!

We'll start by importing a few things that we need:

Next is the main function that toggles on and off the lights. Remember that we want to toggle the light above the button to its opposite state (on if it is off, off if it is on) and the same with the two lights either side.

Our function is called toggle_light and it is passed two variables channel and event by the explorerhat.touch.pressed() method later on.

We check if the channel is greater than 4 and if it is we return nothing because we are only dealing with channels 1 to 4, the 4 capacitive touch buttons along the bottom edge.

If the event passed to our function is a press, then we run our code to toggle the LEDs. We assign our num_moves variable as a global so that we use it elsewhere in our program.

We increment our num_moves variable and toggle the LED that corresponds to the button pressed with explorerhat.light[channel-1].toggle(). The LEDs are indexed from 0 and the buttons from 1, so we have to subtract 1 to toggle the correct LED.

If the button pressed is either 1 or 4, we can only toggle the LED on one side, not both, so we have an if / elif to handle those events.

Finally, we have an else that deals with LEDs 2 and 3, and toggles the LEDs on both sides of the button pressed. We also print a message to tell the player how many moves have been taken so far, using the %i placeholder that is replaced by the num_moves value.

The next part of our code sets everything up to start the game.

We print a message telling the player what to do. Next, we want to light some random LEDs to begin with. The Python random module has a method called random.sample() that takes a list and picks a specified number of items from that list. In our case, we want to pick a random number of integers between 0 and 3, since those correspond to our 4 LEDs. range(0,4) gives us a list [0,1,2,3] to pick from, and random.randint(1,4) gives us a random number between 1 and 4 that tells random.sample() how many integers to pick from the list.

We then loop through that list and switch those LEDs on.

Here's the part of our program that handles the button presses and keeps the light_nums up to date with the LEDs that are currently lit, with a short pause to keep things sensible.

The while len(light_nums) > 0 means that this loop only runs as long as there are still LEDs lit.

There's also a nifty little list comprehension light_nums = [i for i in range(0,4) if explorerhat.light[i].is_on()] that keeps track of which LEDs are lit.

The while loop will exit as soon as the length of the light_nums list is zero, in other words, when all the lights are out. We then run the last bit of code that prints a congratulations message and the number of moves taken, and then blinks a blinky pattern in celebration of your awesome-ness.

Last of all we run explorerhat.pause() to stop everything and exit and that's that.

If you've followed all that, then you should have a fun little game that will keep you occupied for a good 10 seconds or so. Run it by typing python lights_out.py.

If you'd rather just download the code than type all of that in, then you can clone my fork of the Explorer HAT library and run it as follows:

I hope you enjoyed that, and hopefully it taught you a little about event-driven programming with the Explorer HAT Pro.

Need something for this project? You can use the links below to add products to your Pimoroni Shop basket for easy checkout.

Want to checkout or change something? Click here to view your cart.

Formerly, Sandy worked at the University of York, in the biology department, analysing data and telling people that they should have used more replicates. Now a fully-fledged crew member at Pimoroni - head of digital content - working on learning materials and digital chunterings. Find him on Twitter and most everywhere else, as sandyjmacdonald.