This tutorial will guide you through how to assemble your Pirate Radio kit. Pirate Radio is a cute little Pi Zero W-powered speaker that sits on your desk or shelf, playing your music, or streaming Spotify or internet radio.

Pirate Radio takes advantage of the on-board wireless LAN and Bluetooth on the Pi Zero W, and uses our pHAT BEAT DAC and amp to pump out up to 3W of mono audio with 16 RGB LEDs that are ideal for using as a VU (volume unit) meter.

The assembly will be split into two parts: soldering the headers to your Pi Zero W and pHAT BEAT, and assembling and screwing together the acrylic pieces. Please note that in late 2020 we updated this kit to be solderless. If you've got one of these newer kits you can skip the soldering sections - your Pi and pHAT BEAT will come with their headers pre-attached!

It should take around 30 minutes to assemble everything.

We have a guide here that you can follow to learn how to solder headers to pHATs. Soldering the male header to the Zero W is essentially just the same process, except the header should be soldered on top. The photos below show how each header should look when soldered.

If you don't own a soldering iron, or you're just not a pro-solderer yet, then you could use one of our nifty hammer headers that don't require any soldering at all. Our hammer header kit comes with a male header, female header, and a jig to safely and secure attach them to your Pi Zero/Zero W and pHAT.

Note that we've tweaked the back layer, legs, and leg retainers as of 13/04/17, but this guide will cover both the original Pirate Radio and this new, updated version.

You should have the following pieces:

Before you do anything, peel the protective film off all of the pieces of acrylic!

We'll begin by attaching the legs to the blue back layer - the one with the large circular speaker hole in it. You'll also need the two small blue leg retainer pieces, the two legs, and four of the M3 nylon bolts and nuts.

First, slot the legs into the blue retainers, as in the picture below. The curved corners of the leg retainer pieces should match with the curves on the corners of the radio itself. The two curved cut-outs should face inwards, and the speaker will slot neatly into the gap later. 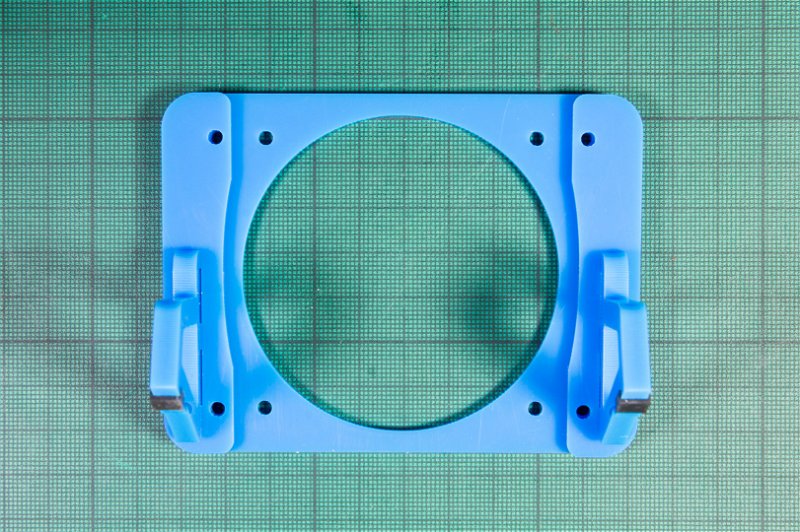 If you have an older Pirate Radio with clear legs, then it should look like this. 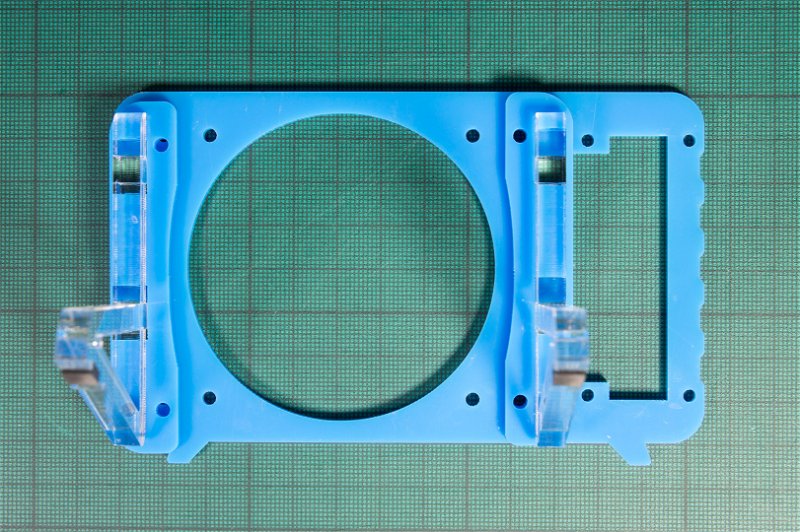 Once slotted into the leg retainers, the protruding part of the leg should slot into the blue back layer. Use the M3 bolts and nuts to secure the legs with the nuts towards the back, and trim off the excess bolt with a pair of snips if you wish. 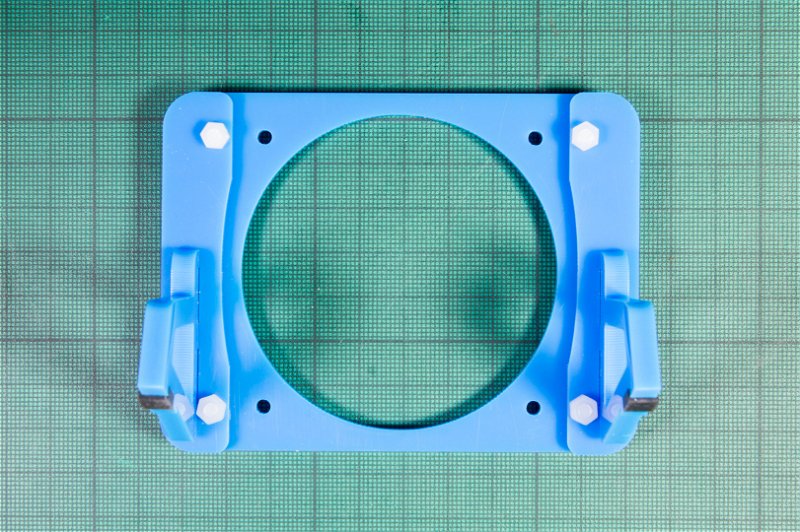 Sit the other blue piece - the middle layer - on top of the back layer, so that the speaker grille lines up with the speaker hole, and then pop the front frosted layer on top of that with the Pirate Radio logo the correct way up and facing the front. 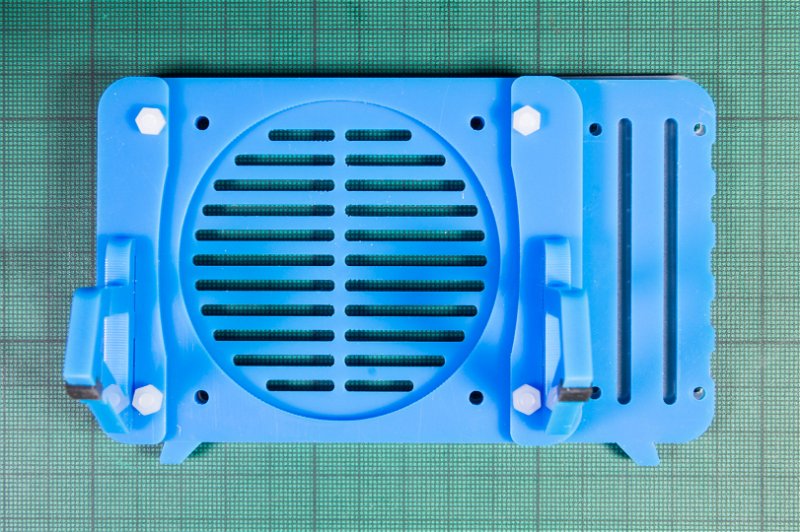 The four bolts and nuts that hold the speaker in will hold all of the layers together. Slide the four remaining M3 bolts through the four holes at each corner of the speaker hole, from the front.

Now, take your speaker and place it onto the four bolts. Use the nuts to secure the speaker, and again trim off the excess bolt if you wish. We mounted our speaker with the wires coming out towards the bottom of the radio. 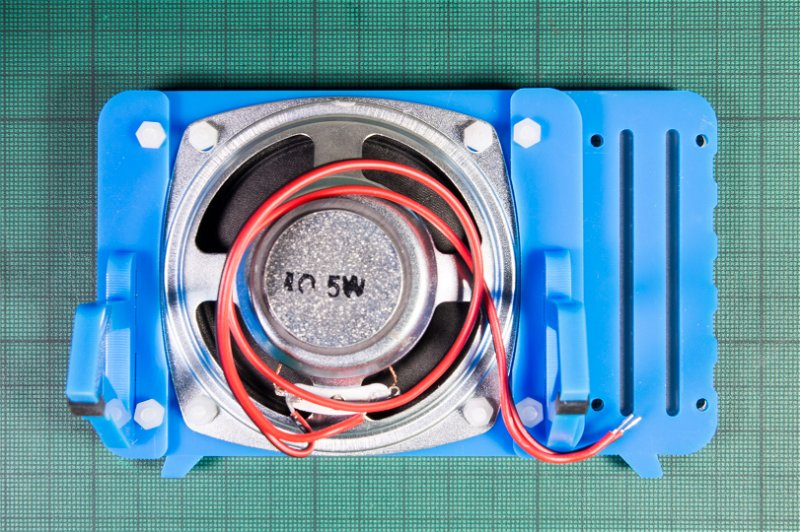 Next, take the four M2.5 bolts and spacers, pop the bolts through the four remaining holes, from the front, and then slip on the spacers behind, as shown below. 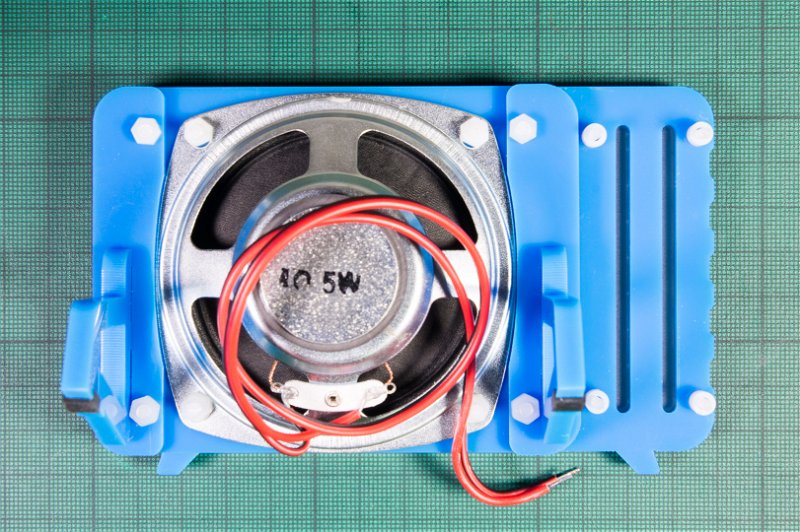 If you have an older Pirate Radio with clear legs, then you won't need to use the spacers, as the PCB should sit flush with the acrylic.

Pop your pHAT BEAT onto the the four bolts, with the buttons towards the outer edge and LEDs facing the front of the radio, and secure with the four nuts. 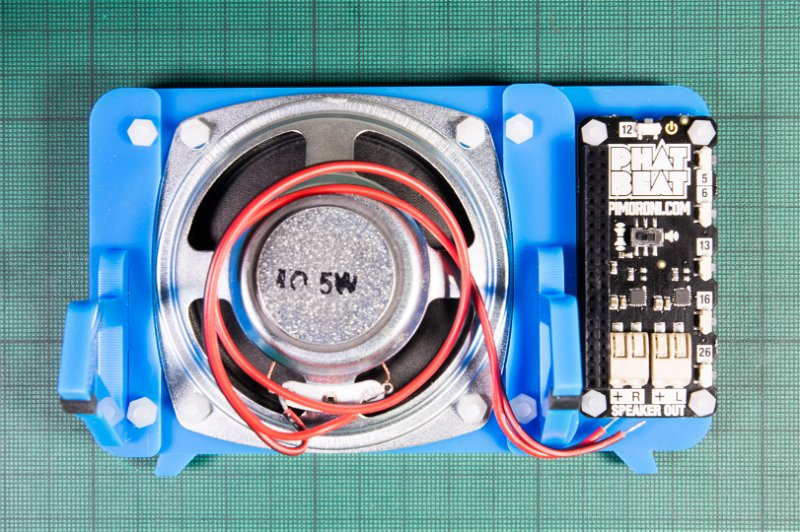 You'll notice that pHAT BEAT has two pairs of terminals, for left and right audio channels. Because we have just the one speaker, we'll just be using one channel. The DIP switch on the back of pHAT Beat DAC lets you switch between mono audio, in which the two channels are mixed into one, or stereo, which will output the left and right channels through their respective speaker. Make sure that your switch is switched to the side with the single speaker icon, to switch it into mono mode.

The wires on your speaker are slightly longer than they need to be. You can either trim them and then tin the ends of the wires again (this is the process of adding some solder to the bare copper strands to strengthen them) or coil up the excess with a cable tie.

To attach your speaker wires to the terminals on pHAT BEAT you press down gently on the little clips on the terminal with something like the point of a pencil or a straightened out paper clip, and then push the wire in and release the clip to hold the wire in place. 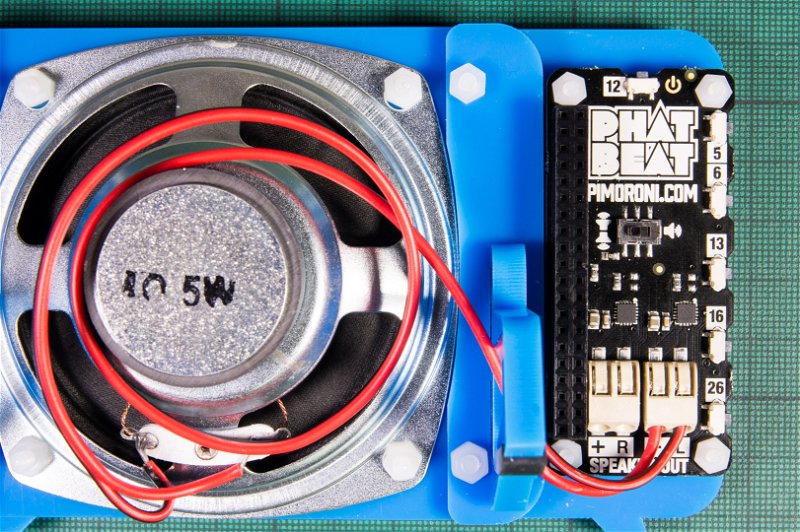 We tucked our speaker wires through the cut-out in the leg to keep them neat and tidy. Connect the black speaker wire to the left - terminal and the red wire to the left + terminal (although you can equally well use the right channel as blended mono is output through both channels when pHAT BEAT is in mono mode).

All that's left to do is to attach you Pi Zero W!

Take your Pi Zero W with soldered male header and pop it onto the female header on your pHAT BEAT, being careful to ensure that all of the pins are lined up correctly. 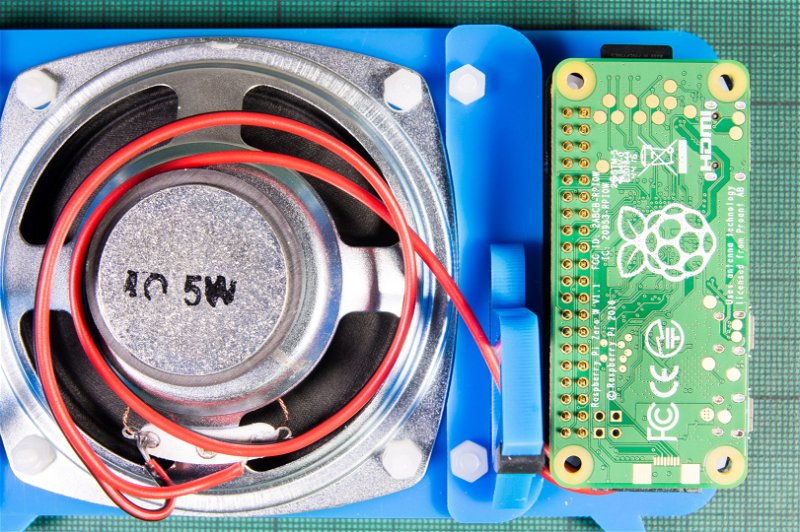 We've put together some tutorials that guide you all the way through getting the software set up on your Pirate Radio, using our nifty one-line-installers:

Learn how to assemble your Pirate Radio kit